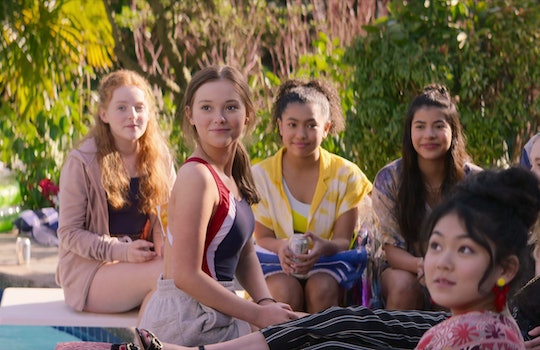 Netflix Is Bringing The Baby-Sitters Club Back For Another Season

They’re back in business!

It's official: Netflix has confirmed that The Baby-Sitters Club Season 2 is coming soon. Like, really soon. The streaming service's reimagining of the classic young adult book series by Ann M. Martin will be back with brand new episodes this October. That's right, Kristy Thomas, Claudia Kishi, Stacey McGill, Dawn Schafer, and Mary-Ann Spier are all returning for brand new adventures and families to babysit in Stoneybrook, Connecticut.

Netflix announced the news about the series’ renewal last year in a sweet video with the cast lip-synching the theme song from the original 90s TV adaptation of The Baby-Sitters Club. And now every episode in Season 2 is just days away from premiering on Netflix.

The Baby-Sitters Club Season 2 Will Premiere On Oct. 11.

Mark your calendars, because all eight episodes in the new season will premiere on Netflix on Monday, Oct. 11. The only thing worse than having to babysit a bunch of screaming children on a school night is the fact that this show is premiering during the school week, which means that your eager kids might have to wait until the weekend before they marathon watch the series.

But as the trailer for Season 2 shows, the wait will certainly be worth it. In Season 2, The Baby-Sitters Club is back in business with two new members — Jessi and Mallory — who are two junior officers in the BSC.

The trailer also shows how things are changing in their personal lives. Romance is brewing, Stacey is getting to be on the cover of a magazine, and Kristy may even become a big sister. But through thick and thin, the friends will always be there for each other. “Being a part of the Baby-Sitter’s Club means that we show up for each other,” Kristy says in a voice over in the trailer.

The series' showrunner, Rachel Shukert, told Variety in July that the first 10 books in the series are "the most cannon." But the other stories in the 131 book series (yep, 131 books total) might not get their chance to shine.

"The books are such a wonderful blueprint," Shukert told Variety. "The first eight to 10 books, I would say, set up the world and the club, and their relationships get cemented, [as do] the bigger stories of what's going on with their parents and how it affects them. It's laying the architecture, so it feels like a jumping off point."

Shukert reiterated this to The Hollywood Reporter. "We really wanted the adaptation to be faithful," she told the outlet in July. "I think that moving forward we'll definitely take inspiration from individual books, but I think it will get a little looser, the way the books do, as well, because they're just a little more episodic the longer the series goes on."

In the final episode of Season 1 of The Baby-Sitters Club, the girls were at camp, focusing on their art, social justice, and standing up against the camp director, according to CinemaBlend. This final episode did not leave off on a cliffhanger and actually wrapped things up in Season 1 quite nicely, which means Season 2 has plenty of space to focus on new storylines.

Shukert told Vanity Fair that she's excited to explore "so many" storylines from the book series. "I love how Kristy evolves with her new family," she told the magazine. "I always loved Mary Anne and Dawn — as their parents get closer, how that kind of changes their relationship. But you know, we'll see."

Lucia Aniello, the director for Season 1 and the executive producer of The Baby-Sitters Club, told Harper's Bazaar that she is looking forward to exploring new storylines with the junior sitters, Mallory and Jessi. "Also, Kristi's moved across town, and I think she has a lot of adjusting to do," she said. "So hopefully if we get another season, that's something we can explore."

Shukert told Entertainment Tonight last year that she is excited to explore Mallory and Jessi’s role in the show. “That’s something that I always liked about Mallory and Jessi, is that the first relationship that you have, especially with people that are a little bit older than you are, where you can idolize them and hope they think you’re cool enough and there’s always a little bit of drive to survive, is an interesting thing to explore,” she said. “Especially for a character like Mallory, who is the oldest of eight kids. What’s it like when she is suddenly the youngest?”

The Cast Will Return

If the Season 2 announcement is any indication, the core cast from Season 1 of The Baby-Sitters Club will likely return for this next season. Shay Rudolph, who plays Stacey McGill in the adaptation, told PopSugar she hopes Stacey does not move back to New York like she does in the books. "I want to stay with the other Baby-Sitters Club girls and have fun babysitting adventures and make more memories on set!" she told PopSugar.

Sophie Grace, who plays Kristy Thomas in the series, also told PopSugar that she hopes to explore more of Kristy's storylines from the book series, like when she coaches a baseball team filled with kids who didn't make it to Little League.

The only person who won’t be returning is Xochitl Gomez, who played Dawn in Season 1. Gomez was forced to drop out due to scheduling conflicts, according to Elle, but will be replaced by Finding ‘Ohana actress, Kyndra Sanchez.

Season 2 Will Continue To Focus On Friendship

Season 2 will continue to focus on the strength of the friendship within The Baby-Sitters Club. "All the great shows that are about female friends — whether it's Golden Girls or Sex and the City — who love each other and are there for each other throughout thick and thin, you always have the one that you outwardly identify with the most, but the truth is, we are all of them," Shukert told Variety. "We have elements of all five of them within us and that's why they hit the most: because they are one complex whole."

Season 2 will also focus on the girls as they begin to find themselves as people, Shukert said in a statement last month. “We also wanted to continue to exploring themes that allow all young viewers to see themselves represented on screen, while also obliquely dealing with many of things we’ve all been through in the past year: loss, change, responsibility, and trying to find joy and meaning un unexpected places.”

You Can Find Season 1 On Netflix

While you wait for Season 2, you can catch up on all 10 episodes of the first season of The Baby-Sitters Club on Netflix right now.

This article was originally published on Oct. 29, 2020