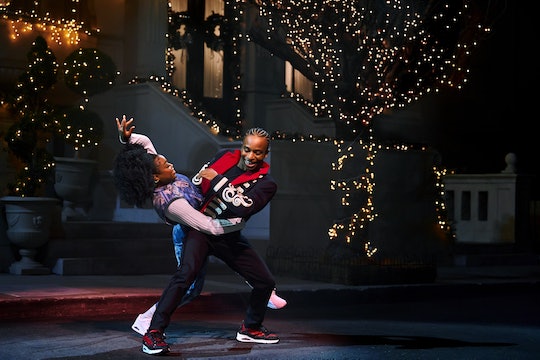 The Nutcracker is being reimagined on the streets of New York City!

This holiday season, The Nutcracker is being reimagined on the streets of New York City. The Hip Hop Nutcracker revamps Tchaikovsky's classic through the sounds in this fun, upbeat, inspirational holiday event, which includes a DJ, a violinist, and one of hip hop’s founding fathers.

The production itself has been touring and performing for a decade and is celebrating its 10th anniversary this season, including an original special on Disney+. The trailer for the holiday extravaganza premiered on Nov. 3 and provides a peek at all the fun in store. Below is everything you need to know about The Hip Hop Nutcracker production coming soon to Disney+.

The Hip Hop Nutcracker has the same storyline as the original, but with a modern twist.

Like the original production, Maria-Clara and the Nutcracker Prince go on a holiday venture to a magical fantasy land. But in this version, the story includes digital graffiti and visuals, as well as breakdancing toys.

The Disney+ special is inspired by the production.

The Disney+ special was inspired by the live show and has a little twist to the plot. According to the synopsis, Maria-Clara’s parents are not getting along at the annual New Year’s Eve Block Party. In hopes of bringing her parents together, she embarks on a holiday adventure to bring her parents back together and finds help from a magical toymaker, Drosselmeyer, and the Nutcracker who she brings to life. Together, the Toy Soldiers and mice and make it “back in time to the Land of Sweets in order to find the key to unlock her holiday wish.”

The production will be touring starting on Nov. 14, making stops in Hollywood, Cincinnati, Pittsburgh, Atlanta, and Charlotte.

RUN DMC's Rev Run is the narrator of the Disney+ special. Kurtis Blow, another hip-hop legend is also part of the production as the special guest MC. Caché Melvin plays Maria Clara and Du-Shaunt “Fik-Shun” Stegall stars as the Nutcracker.

“This feels like a dream!!,” Melvin captioned her Instagram post about the special. “I am beyond grateful to be apart of such an incredible film and so excited I can’t believe it’s almost here! Reimagined, Reinvented, Remixed.”

When will The Hip Hop Nutcracker premiere?

The Hip Hop Nutcracker will be available to stream on Disney+ on Nov. 25.