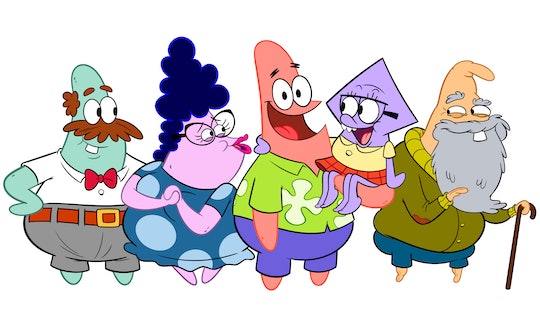 Patrick Star From SpongeBob SquarePants Is Getting His Own Show

“No one was harmed in the making of this show except me. Ouch.”

SpongeBob SquarePants' best friend Patrick Star is getting his own show. That's right, The Patrick Star Show is coming to Nickelodeon this July and it will focus on the hilarious sea star and his equally quirky family.

Nickelodeon's SpongeBob SquarePants has been entertaining kids for more than 20 years. The sponge who lives in a pineapple under the sea is always up to something with his rock dwelling BFF, Patrick Star. But now, people will get to learn more about Patrick in a brand new spinoff series, coming to Nickelodeon in July. Here is everything that you need to know about The Patrick Star Show before it airs later this year.

Patrick's Family Will Be In The Spinoff

The Patrick Star Show is described as a "family sitcom" starring a younger Patrick Star, living at home with his family, where he hosts his own show for the neighborhood from his bedroom. Patrick's little sister, Squidina, is there to work behind the scenes, ensuring that things run smoothly while his parents and grandparents provide their support for his show in their own unique ways.

As it turns out, Patrick's family is just as whimsical as he is. And while his family's "unpredictable adventures" can sometimes interfere with his TV show, according to a press release, it makes for great television.

Where & When The Patrick Star Show Will Air

An specific premiere date has not yet been announced, but you can expect to see 13 new episodes air on Nickelodeon sometime this July.

In this new show, you'll learn more about Patrick's very fun and unique family. According to a Nickelodeon press release, here are the new faces that you can expect to see in Bikini Bottom:

The Teaser Trailer Is Here!

In the first official teaser trailer, you can briefly see some of his very fun family members and see some special appearances from your favorite people in Bikini Bottom, like SpongeBob and Squidward. “The stories, names, and characters portrayed in this production are suspicious, especially mine,” Patrick says in the preview for his own TV show. “No one was harmed in the making of this show except me. Ouch.”

In the meantime, while you wait for The Patrick Star Show to premiere in July, you can stream the new SpongeBob film, The SpongeBob Movie: Sponge on the Run on the streaming service, Paramount+.

This article was originally published on March 4, 2021