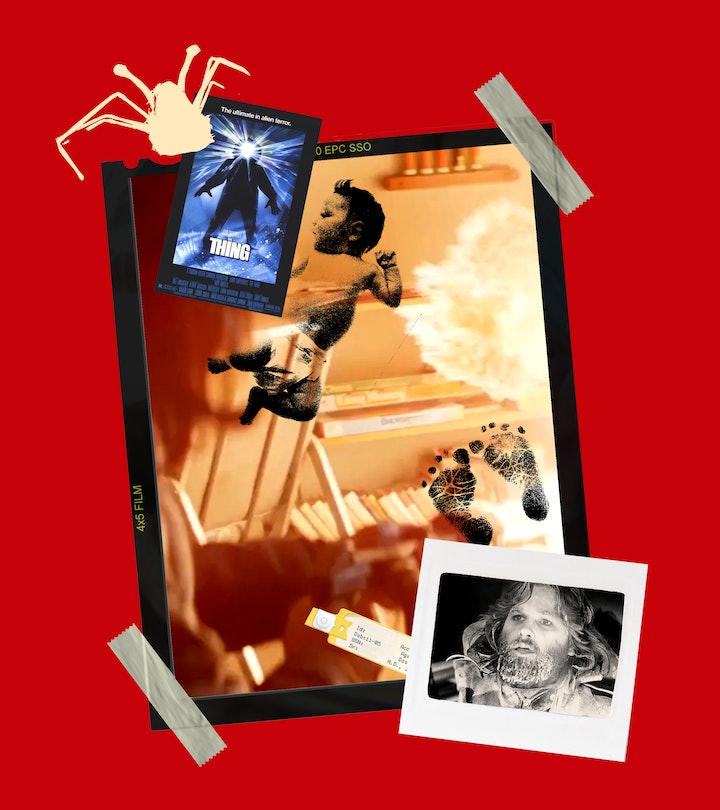 I figured it would be hard to feel sorry for myself while watching Kurt Russell operate a flamethrower.

Some people are guided by astrology while others find meaning in scripture, but to help make sense of the world I’ve always turned to movies and television. My first spiritual leader was Punky Brewster. I worshiped her clothes and her bedroom, but beyond that, she helped a 5-year-old me understand the otherwise complex dynamics of being adopted. Robin Hood (the cartoon fox, of course) taught me to love, and Katherine Hepburn taught me to be “yar” in The Philadelphia Story. I’ve had my share of false idols (Woody Allen; Aunt Becky), yet I’ve always turned to Hollywood characters to help me map out my own life.

I hit an unexpected roadblock during my pregnancy, though. I'd assumed I would tune into a primal maternal energy that would intimidate yet beguile anyone I encountered, and my ambivalence about motherhood would subside. In reality, I spent most days complaining that everything tasted like pennies and counting down the days to when I could enjoy peeing again.

I felt like I was doing pregnancy wrong, so I turned to movies about nervous moms-to-be like Waitress and Rosemary’s Baby to help quell my anxieties. While one film ends with a woman finding the strength to stand on her own and the other with a woman succumbing to the will of a satanic cult, they both reach a moment when each mother is transformed by an instinctive love at the first glimpse of their newborn child. Afraid that I would not experience that transformation, my fears for the future worsened — my mind was not eased.

Six months into my pregnancy, I celebrated Halloween with takeout Indian and John Carpenter’s The Thing. I figured it would be hard to feel sorry for myself while watching Kurt Russell operate a flamethrower. Between Ennio Morricone’s synth-score and the sight of Wilfred Brimley sans mustache, I felt a low-grade terror as I balanced my bowl of lamb vindaloo on my belly. Still, a clean-shaven Brimley was a mere prelude to the horrors that awaited me.

The Thing, if you're unfamiliar, is an alien creature capable of disguising itself as any living organism it encounters. It terrorizes an Antarctic research team who, no longer sure which team members have been subsumed by it, turn on one another. If let loose, it could assimilate, and ultimately destroy, the whole planet within a matter of years. But before it takes on the form of a beautiful snow dog or Keith David at his swolest, it undergoes a disgusting secretion-heavy transformation that Carpenter spent roughly 10 percent of his budget on despite having less than 10 minutes of screen time. And that’s what I was watching, in the dark, completely alone, with only a half-eaten bowl of takeout to comfort me. Unfortunately, most food rapidly loses its appeal while you’re watching a writhing creature made of equal parts alien, dog, and Wilford Brimley.

I had been searching for a promise that everything would be all right, but I actually needed to accept uncertainty, and to trust that when I faced the unknown, I could handle it.

I had my hand on the remote the whole time, my mind screaming, I can’t handle this! And I truly believed I couldn’t. But the horror was over in a matter of moments, and I wanted to see what happened next. That’s when I thought, This is what motherhood must feel like. I wasn’t Keri Russell making pies, I was Kurt Russell ready to pick up that flamethrower. I had been searching for a promise that everything would be all right, but I actually needed to accept uncertainty, and to trust that when I faced the unknown, I could handle it. That was enough to get me through the next three months.

Which was good, because, in the end, I didn’t get my transformative first glimpse. My first moment of motherhood was waking up from general anesthesia for an emergency C-section, feeling utterly bewildered, with a baby in my arms. The pain I was in overrode any maternal instincts I had. When the nurse asked me if I wanted to try nursing my daughter, I looked at her as if she’d asked me if I wanted to hang drywall.

Like the research team from The Thing, my body had been subsumed by an unknowable creature. It was blood-soaked and secretion-heavy. It would fundamentally change who I was and how I saw everyone around me.

After I left the hospital, I found myself downplaying the details of my own delivery, particularly to expectant mothers. I didn’t want my own scary reality to be the thing that disturbed their idyllic fantasies. But then I thought of how my daughter's cord had been wrapped around her neck, and the horror movie that was my birth experience was the thing that saved her life. Would Kurt Russell think, “Sure, I tried to save humanity, but I’m disappointed that I had to use a flamethrower to do it?”

My body had been subsumed by an unknowable creature. It was blood-soaked and secretion-heavy. It would fundamentally change who I was and how I saw everyone around me.

And even the smoothest pregnancy looks far more like a horror movie than a Hallmark one. After all, the life that I knew was utterly destroyed. I’ve been assimilated into a new world, riddled with capless markers and Lego bricks. I’ve encountered unimaginable terrors, from playground fights to preschool fundraisers. At my side is a 7-year-old maverick, determined to run headfirst into danger. With every first we face, from driving her home from the hospital to dropping her off at a birthday party, I get through these moments accepting how little control I have over what will transpire. Some of life’s greatest experiences happen when you don’t get to know the outcome.