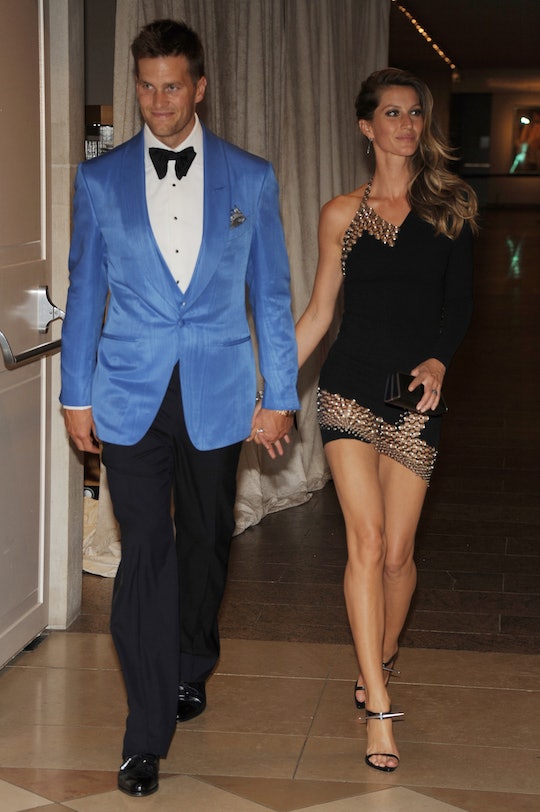 The Tampa Bay Buccaneer is focused on being the best quarterback and father.

All eyes are on Tom Brady these days, ever since the football star and his supermodel wife Gisele Bündchen filed for divorce after 13 years of marriage. And while the NFL pro and father of three surely needs some privacy to process this huge life change, he recently opened up about the split for the first time and said that he is committed to being the best dad and football player.

On the most recent episode of his Sirius XM podcast Let's Go!, the Tampa Bay Buccaneers quarterback spoke publicly about his break-up and revealed that being a father is on the top of his list of priorities. “I think there's a lot of professionals in life that go through things that they deal with at work and they deal with at home. Obviously, the good news is it's a very amicable situation and I'm really focused on two things, taking care of my family and certainly my children, and secondly, doing the best job I can to win football games,” said Brady.

“So, that's what professionals do. You focus at work when it's time to work, and then when you come home you focus on the priorities that are at home. All you can do is the best you could do. That's what I'll just continue to do as long as I'm working and as long as I'm being a dad,” he continued.

Brady also talked about his own father and mother, Thomas Brady Sr. and Galynn Patricia Brady, and how he looks up to them as parents and role models. “I have incredible parents that have always taught me the right way to do things. I want to be a great father to my children and always try to do things the right way as well.”

This is not the first time the Tampa Bay Buccaneer has looked to his own father to guide his path as a dad. In fact, Brady has gotten pretty emotional when talking about his parents. “I'm a dad to some amazing children. When I think about being a dad, I think of him because of what my dad meant to me. I know I'm not as good a dad to my kids that my dad's been to me. I use them as my example of how to keep a family together and to care, to support, and how to love,” Brady shared in an episode of ESPN’s Man in the Arena.

Brady is a father to 15-year-old son Jack, who he shares with ex-girlfriend Bridget Moynahan. He is also co-parenting 12-year-old Benjamin and 9-year-old Vivian with Bündchen. The former couple share joint custody moving forward and are on the same page when it comes to raising their kids and putting them first.

While Brady is now sharing some of his personal life with his fans, he seems to be laying low with his kids at home. The TB12 Method author was recently spotted in Florida taking his children to a movie hours after his divorce was finalized. Although it’s definitely not easy for any family to go through such a huge change, it’s certainly seems harder when you’re under the glare of the spotlight as one of the most famous men in sports. Luckily Brady and Bündchen are committed to being lasting amicable co-parents, even if their relationship is over. And as Brady transitions to his new normal, he also has the steady rocks of his mom and dad to lean on.