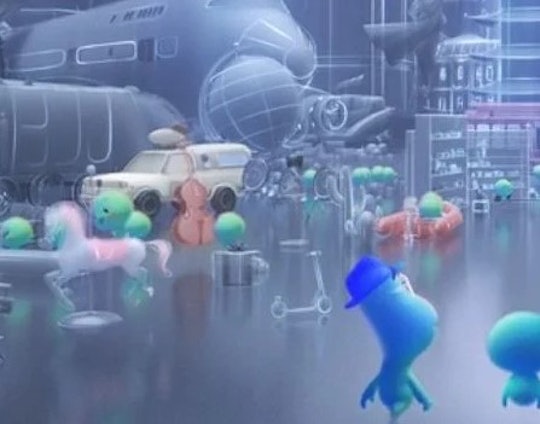 Hint: It's where everything else is!

You might have missed it, but Pixar's newest movie Soul features a fun connection to Toy Story, which has been seen in almost every Pixar movie since the 1995 feature film. And that's Pizza Planet, of course, the fictional space-themed restaurant and arcade first introduced to Pixar fans in Toy Story. If you didn't spot it during your first viewing of Soul, here's where you can see the iconic Pizza Planet truck in the 2020 animated movie available to stream on Disney+.

Dubbed the "Pizza Planet truck Easter egg" by bloggers and Pixar-enthusiasts, the truck made its debut appearance in Toy Story when Woody and Buzz Lightyear are left stranded at a gas station. Since then, the truck has been featured in 22 of the 23 Pixar films, such as A Bug's Life, Toy Story 2, Toy Story 3, The Incredibles, Monsters, Inc., and Finding Nemo, according to ScreenRant.

It has become a fun and symbolic tradition, which has been carried on in Pixar's newest movie. So where is the Pizza Planet truck in Soul? Well, where would you hold a truck in the afterlife? The Hall of Everything, of course! The Pizza Planet truck makes a brief appearance in Soul at approximately 26:48 into the movie.

In the scene with the truck, 22, played by Tina Fey, takes Joe Gardner, portrayed by Jamie Foxx, to the Hall of Everything, a place where unborn souls go to find their spark. The truck is parked to the left in front of an airplane, large globe, and garbage truck. A cello is leaning against it. It'll be easy to spot because it's one of the few things that are not colored in a blueish-gray hue.

Fans have also been on the lookout for other Pixar-egg hunts that are hidden in Soul, such as A113, the Pixar Ball, the Partners Statue, and 2319, which is the code for a human entering the monster world in Monsters, Inc.