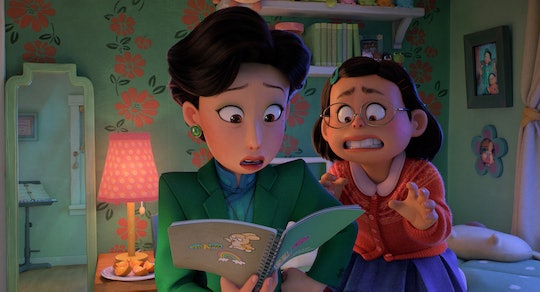 After Turning Red premiered on Disney+ on March 11, parents on social media expressed discomfort with some of the film’s themes.

The release of a new Pixar movie is always an exciting event for families. Known for their heart and impeccable art and design, these stories meet kids where they are without talking down to them. There’s also always a level parents appreciate even more than their children. Turning Red is story-driven and beautifully rendered, but some parents have expressed their disappointment, saying watching Turning Red is inappropriate for kids of a certain age, so here’s what you need to know. (Note: Some spoilers about Turning Red are ahead.)

The coming-of-age film is rated PG

Turning Red tells the story of 13-year-old Mei Lee. She lives with her doting parents in Toronto in 2002. Mei is especially close to her mother, Ming, and enjoys spending time with her, even if it’s just sweeping the courtyard of the temple the family manages. But, 13 is 13, that age where we’re all “finding ourselves,” and Mei finds herself wanting to listen to the music she likes (her mom thinks it’s filth... too much gyrating), spend more time with her friends, and, yes, even express her interest in *gulp* boys.

One morning, after a particularly embarrassing incident involving her mom (more in a minute), Mei awakens to discover that she has transformed into a giant (and adorable) red panda! Turns out this is a generational blessing/curse. Her mom knows a ritual to banish Mei’s inner panda forever... but over time Mei kind of likes who she can be when she “unleashes her panda.”

Parent reviews of Turning Red have been mixed

While many parents praised the movie as “adorable,” “refreshing,” and a great representation not only of teen girls but in showcasing characters of color and characters with disabilities, others were less enthusiastic.

Many parents and other adults have criticized the film for encouraging rebellion, of being inappropriately sexual, and no small amount of kerfuffle over the fact that periods (and their assorted accoutrements like pads) are discussed. “That Turning Red Disney movie is NOT appropriate for children,” tweeted one parent. “YUCK!”

While the overall consensus on Common Sense Media is that Turning Red might be best for kids over 10 years old to appreciate the themes, there are a number of parents who’ve reviewed the movie and deemed it appropriate for 6-year-olds or kids as young as 3. “Great opportunity to again normalize puberty,” one parent wrote on Common Sense Media.

Indeed, reviews have been mixed and highly controversial, so here’s what else you should consider.

Coming-of-age rebellion is nothing new in children’s entertainment

It’s a little surprising, perhaps, to see so many people get upset to about the idea of children rebelling against the authority of strict but loving parents is getting so much attention in this discussion. This is among the most common of themes in kid-centric entertainment, even if we just look at Disney/Pixar properties — it’s everywhere! From Ariel defiantly telling King Triton to be with a man she’s never actually met in The Little Mermaid; to Merida constantly groaning in her mother’s face in Brave; to Nemo openly defying Marlin in Finding Nemo; to Moana sailing away from home... honestly it feels like there would be a shorter list of Disney and Pixar movies that didn’t have a “child disobeys their parent” plot line!

Maybe it’s the relative modernity of Turning Red that makes people uncomfortable? Mei sneaking out to a party hits different from Simba going to the elephant graveyard. Still, the concept of childhood rebellion is basically the same in all these movies.

Depictions of sexuality in the movie are extremely PG

Despite some claims that the movie features naked drawings of Mei’s crush, it does not. Ming was absolutely horrified when she saw these drawings: we weren’t. Here are the scandalous images you can expect...

The most naked the drawing of the character gets is here, where Mei imagines him as a merman...

Certainly, bare chests (and mermen, for that matter) are nothing we haven’t seen in Disney. One might say it’s not the chests so much as the innuendo. But this is also nothing new! From Anna discussing how “foot size doesn’t matter” in Frozen to two cars flashing their headlights (get it?) at Lightning McQueen in Cars to, like all of Hocus Pocus, Disney has been sprinkling in a not-so-subtle dose of the stuff for a while now. Remember when Ariel’s voice drops to a sultry groan when she starts cozying up against that muscle-bound statue of Prince Eric and says, “Run away with you? This is all so sudden.”?

So what’s really the issue?

It’s the only thing we can think that’s present in this movie that isn’t in dozens of other movies parents don’t seem to have issues with.

The morning Mei wakes up to discover her transformation, Ming very reasonably believes her (unseen) daughter’s freak-out is because “the red peony bloomed” and proceeds to grab a trove of all kinds of different pads. In another (hilarious) scene, she runs to Mei’s school to bring more pads.

“Disney’s new Turning Red movie, wish it came with a warning label!” tweets one parent. “This is rediculous [sic... though the pun would be great]! Not what I wanted to watch with my 8 year old son. Leave the period/hormonal stuff for parents to teach at home! When they feel it appropriate #UnpopularOpinion.”

Another tweeted, “Trash movie. You need to warn parents it involves period stuff. My 7 year old son doesn’t need to see that. You marketed it as a movie about a fluffy red panda. Not menstruation and teen rebellion.”

Clearly, however, even if this isn’t the prevailing opinion (lots of people have cheered the film’s discussing of menstruation and puberty), these parents definitely aren’t alone.

(Though, really: it’s a movie about a 13-year old-girl called Turning Red. The metaphor was right there the whole time...)

Obviously, this is an evergreen statement, and it’s no less true of Turning Red. However, before you write off this movie based on negative social media reviews and “warnings,” know what’s included. We couldn’t spot anything uniquely concerning in this movie at all, except a great opportunity to start talking to kids about what to expect from puberty...