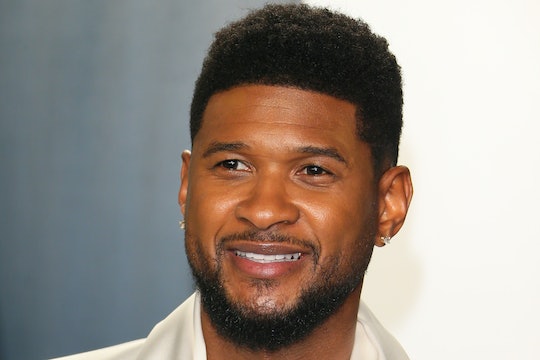 The proud dad gushed that he's "kind of the apple of her eye right now."

One R&B singer has it bad for the new lady in his life. During a recent appearance on The Ellen DeGeneres Show, Usher revealed the first photo of his baby daughter, Sovereign to the world and was full of smiles while talking about his newest bundle of joy during their virtual interview.

"That's my little Bo," Usher said as he shared a photo of him kissing Sovereign‘s tiny forehead. The singer and his girlfriend, Jenn Goicoechea, welcomed Sovereign Bo Raymond back in September. At the time, Usher wrote on Instagram that his family was "feeling blessed and full of love with the arrival of our beautiful baby girl" and he had Stevie Wonder's "Isn't She Lovely" playing on "repeat."

"She looks like a little porcelain doll. She doesn’t even look real," DeGeneres said when saw the photo of little Sovereign.

"You believe that until you have to change her diaper," Usher jokingly replied.

Usher revealed that Sovereign's due date was actually in November — Nov. 11 to be exact — but she made her debut a bit earlier than expected. "She was scheduled to be a Scorpio but decided she had a different plan," he told DeGeneres. "You know Libras, you know they have their minds made up, what they wanna do."

"And it's funny because the umbilical cord was wrapped around her waist, so she's pulling the thing like 'pull me out of here, it's time to go,'" he added.

On Wednesday, his daughter's original due date, Usher also shared the precious photo on his Instagram and captioned the location as "Heaven on Earth."

"Happy 11:11 Sovereign ... today was the day I thought you would arrive," he wrote on Instagram. "You had a different plan," adding the hashtags #Babyknowsbest and #Godsplan.

Sovereign joins big brothers, 11-year-old Naviyd Ely and 12-year-old Usher V, who Usher shares with his ex-wife, Tameka Foster. The proud dad told DeGeneres during the same appearance that his sons are "coping well" and are "very, very excited about being big brothers."

The Grammy-award winning artist also shared that, as they get older, his kids consider him "less cool of a dad," but Sovereign is giving him the opportunity to start the cycle all over again. As he proudly told DeGeneres, "I'm kind of the apple of her eye right now."