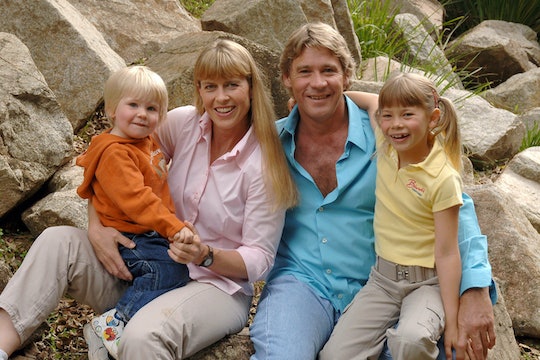 How Steve Irwin Gushed About Fatherhood & His Kids Is Just Beautiful

In a video shared by his son, the late Crocodile Hunter said, "This is why I was put here."

Robert Irwin lost his dad in 2006, when he was just 3 years old. While he might not remember much about the late Crocodile Hunter since, he is fortunate to be surrounded by people who work hard to keep his memory alive. Particularly when it comes to reminding him just how much he meant to his famous father. In honor of Robert's 17th birthday, the staff of the Australia Zoo created a video of Steve Irwin getting emotional about the birth of his two children. And, as Robert wrote when he shared the thoughtful gift on Instagram, it "means the world" to him.

Steve Irwin died in 2006 after being stung by a stingray during a dive. The Australian television personality was famous for being an enthusiastic wildlife expert, operating the Australia Zoo initially founded by his own parents, and as a famed conservationist. But, as Irwin explained himself in the video shared by his son, he was most passionate about being a dad to daughter Bindi and son Robert with his wife Terri Irwin.

In the video, Irwin speaks to a crowd outside the Australia Zoo in the video while wife Terri carries their baby son Robert in her arms, with the proud dad telling his fans, "I'm at the hospital and Terry's pushing and pushing and it's hard. And it's hard. And anyway, bang! Pop him out and I lifted him up and he's a little bloke and I put him on Terry's chest and we're just stoked. And at that moment, at that very moment, I saw the light. The whole time, you hear you're like, ‘I'm catching crocs, I'm saving wildlife, I'm doing this and I'm doing that.' But when Bindi was born, I had the same sensation now with little Bob. Same sensation like, ‘This is why I was put here.'"

Robert Irwin shared a sweet video of his dad talking about his birth.

Irwin went on to share his hopes for his little ones in the event of his death, saying "Because I could be dead tomorrow so I need these blokes to come out as quick as they can. So this little bloke's going to have to catch crocs with Bindi."

For his part, 17-year-old Robert, who works and lives at the Australia Zoo alongside his mom, pregnant sister Bindi, and her husband Chandler Powell, that he is "beyond honored" to continue his father's legacy," as he wrote on Instagram. "And I hope more than anything that he would be proud," he added. "I want to thank you for all of your lovely birthday messages and thanks to all who joined us for the celebrations at Australia Zoo today. Looking forward to seeing what this next year brings, in the last year of my childhood!"

Bindi Irwin wrote on her brother's post, "Dad is always with you.Love you so much," while other social media users rushed to reassure the young man that "Your dad would definitely be proud of you. Hope you had a wonderfully hoppy happy birthday."

Both Robert and Bindi Irwin were young when they lost their father, far too young. But they keep his memory alive by honoring his legacy through animal conservation, through their work at the Australia Zoo, and perhaps most importantly, by remembering just how much it meant to him to be their dad.