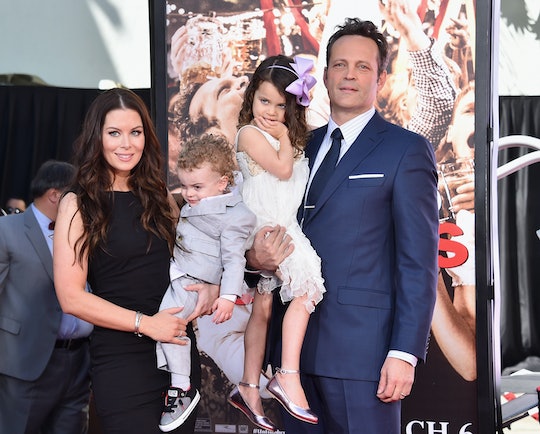 There is no escaping Vince Vaughn these days. The uncrowned King of the Christmas comedy is on television non-stop this month between Fred Claus and Four Christmases, which means you can spend the holidays with him even if you don’t know him. But what about the man himself? Who is he spending the holidays with in real life? Here’s everything you need to know about Vaughn’s wife, Kyla Weber, and their sweet children, daughter Locklyn and son Vernon.

He’s been married for 10 years.

Back in the ‘90s and early ‘00s, Vaughn was almost as well known for his love life as he was for his movies. He dated two of his co-stars, Anne Heche and Jennifer Aniston, the latter in the months after she and husband Brad Pitt ended their very public marriage. But it wasn’t until 2008 that he met the woman he would marry. And interestingly enough, she was not even in the entertainment industry.

His met his wife at a friend’s wedding.

Now here’s a bit of a life imitates art moment for you; the Wedding Crashers star met Canadian real estate agent Kyla Weber at the wedding of a mutual friend, per the Globe and Mail. The pair worked at a long distance relationship for a few years before marrying in a small private ceremony in 2010, and Vaughn opened up to Ellen DeGeneres in 2011 about how his marriage had changed him. “I met the best girl in the world, it gives you such a great purpose in your life,” he said at the time. “Sometimes, in our industry, well, I speak for myself — maybe that’s an excuse — but you don’t mature always at the same time, so I was very fortunate that when I got ready and was open to that, then that person came into my life.”

In 2011, they welcomed their daughter.

In 2011, Vaughn and Weber welcomed their first child together, daughter Locklyn Kyla, whose name is Gaelic and means “lake land.” As the couple stay far away from the limelight, not much is known about his daughter. Other than the fact that she is apparently a funny kid like her dad. In 2020, Vaughn told Kelly Ripa and Ryan Seacrest that Locklyn really likes comedies, and while he doesn’t really want her to see some of his more adult-themed movies, she’s a fan of Dodgeball.

Locklyn became a big sister in 2013 when Weber and Vaughn welcomed baby boy Vernon Lindsay. Like his sister, Vernon’s name also has an earthy meaning. Vernon is of English origin and means “place of alders,” which is a cool looking tree in the birch family. Vernon joined his dad as a little boy in an adorable suit when Vaughn was inducted into the Hollywood Walk of Fame in 2015, but otherwise his life has stayed pretty private. We do know that he is a bit of a little daredevil with an “appetite for the dangerous stuff,” Vaughn told Jimmy Fallon in 2020. “He’s 7 years old and I watched the original Dirty Harry with him. I don’t know how this plays out, but I did it.”

Life in the Vaughn household sounds pretty fun on a regular basis. But just imagine how it must be at Christmas. Their dad is the younger brother of Santa Claus, after all.