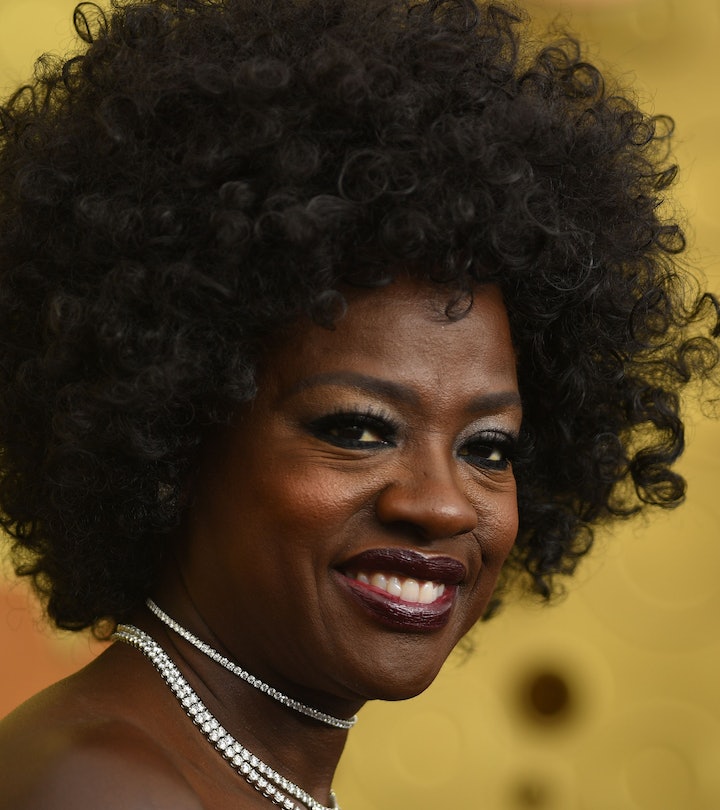 The actress was learning about civil rights when she was "5 or 6 years old."

Before one Emmy, Oscar, and Tony Award-winning actress was making an impact on the big screen, she was finding her voice as a little girl on the civil rights scene. During a recent interview, actress Viola Davis revealed her mom took her to protests when she was a kid and opened up about how those experiences helped shape who she is today.

"She would bring us to these protests," Davis shared during an interview for the upcoming issue of AARP The Magazine. "One, in particular, was at Brown University. The police threw us in the paddy wagon, and I was crying. I was 5 or 6 years old. I was a crybaby!" The actress' mother, Mae Alice, who worked in factories and as a maid, pushed for equal rights in their underserved Rhode Island community.

"It was all about welfare reform," Davis, who stars as Ma in Netflix’s Ma Rainey's Black Bottom alongside the late Chadwick Boseman, said during the same interview. "She was the only African American in the group. But she and several women, working-poor parents, showed up to fight for reform, so we could have a more self-sufficient way of life. She wanted programs like Head Start in place so that we didn't have to stay on social assistance."

Davis, who was born on her grandmother's farm in South Carolina, did not mention whether she and her mother were arrested, but she told the magazine the protests were an eventual success and a health center was built in their neighborhood. "We all went to after-school programs there for as long as I can remember — with sewing, crocheting, knitting, nutrition classes," Davis told AARP. "That's all we were allowed to do. My mom said, 'Y'all are going to be at those classes every Tuesday through Friday night after school.'"

This is not the first time Davis has reflected on her own childhood and opened up about how she works to instill resilience in her own daughter, 10-year-old Genesis, to help prepare her for the challenges she will face in her life. In a 2019 interview with People, Davis said she doesn't "shelter" Genesis from the world and tries to "empower" her. “I empower her to understand that she has to count it all as joy. Even her mistakes, her failures, her triumphs, what she looks like, all of it," she told the magazine. "That’s all a part of her loving herself, even if none of those things change.”

And in a 2018 interview with Brené Brown, the 55-year-old actress stressed how important it is to her that her daughter, whom she adopted in 2011 with her husband, actor Julius Tennon, knows her inspiring story. "I will not be a mystery to my daughter," Davis said at the time. "She will know me and I will share my stories with her — the stories of failure, shame, and accomplishment. She will know she’s not alone in that wilderness.”

As for her own mother, Davis said in birthday tribute earlier this year said she is "my heart" and the "reason I'm here."