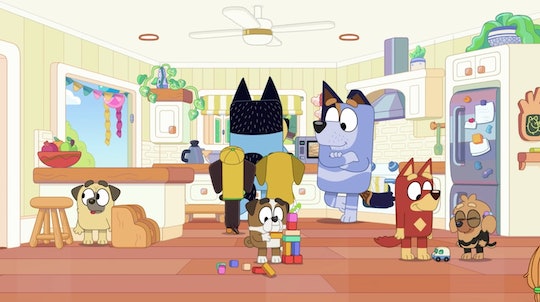 Bluey is filled with countless relatable moments, which is part of what makes it so great. Take Season 1, Episode 2, “Hospital,” for example, when Bluey and Bingo want to play with their dad Bandit, but he only agrees as long as he can lay down during the game. It’s pure genius! Another realistic situation was captured in a viral TikTok, this time featuring the antics of one of Bluey’s friends, Buddy.

TikTok user Samantha Martinez (@sushiibug) posted a video March 10, breaking down something she noticed about the pug named Buddy in Season 2, Episode 45, “Handstand.” The episode happens during Bingo’s 5th birthday party, with all of Bluey and Bingo’s friends going through the kitchen as their mom Chili prepares food for the kids.

“So you notice how Chili comes in and she moves that step stool over there, and then she puts whatever that is on top of those, right?” Martinez narrated over the video. “And then she puts the whipped cream on top.”

But then, Buddy comes in the kitchen, moves the step stool, and crawls up to the counter. “He sticks his whole-a** hand in the whipped cream!” Martinez said. “And f*cking leaves! And guess who comes back in to f*cking use it to serve to people? F*cking Chili.”

So after Buddy stuck his entire hand in the whipped cream, unbeknownst to Chili, she then scoops more whipped cream out of the container to prepare more snacks for the kids. Um, ew!

After this, he comes up to the counter to do it again. Later, Martinez skips ahead to show a scene where Buddy is licking his hand in the corner, supposedly enjoying that whipped cream.

Martinez wrote, “I thought this was hilarious” in the caption.

This actually isn’t the first time Buddy is shown being a menace. In Season 1, Episode 29, “The Creek,” Buddy does something else super gross (and extremely common for 5-year-olds). TikTok user Jonathan Minnema (@jonathanminnema) posted a video March 8 with the caption: “Buddy is literally the greatest character in Bluey.”

The video shows Buddy at the playground with Bluey, Bingo, and some of the other kids. While Bandit is resting at the bottom of the slide, Buddy is at the top of the slide — picking his nose! After he picks his nose, he looks left and right, and then he wipes his snot on the slide. Yes, you can actually see a blob of snot on the slide where his finger was.

While this is disgusting, it’s also not entirely surprising. Who among us hasn’t caught their kid eating snot or wiping it on things that aren’t a tissue? Kids are gross man, and Buddy is the perfect representation of that. But this honest portrayal of kids is all part of Bluey’s charm. Just, maybe don’t keep open containers of whipped cream on the counter…