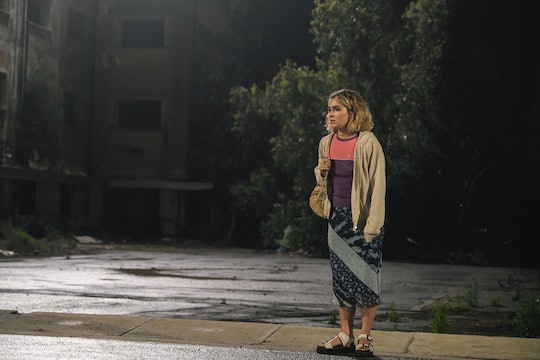 [Note: Major spoilers from The White Lotus Season 2 finale are ahead.]

What can we even say about the Season 2 finale of The White Lotus? It dropped on Sunday and it’s truly all anyone can talk about days later. Especially that storyline, the one where everyone’s favorite self-actualized icon Tanya (Jennifer Coolidge) kills several people on a yacht before trying to escape on a dinghy and then drowning herself in the process. All as her assistant Portia (Haley Lu Richardson) appears to be in danger of being kidnapped by Jack (Leo Woodall) in Palermo. While there might be a lesson or two to learn from Tanya’s grim circumstances, the real lesson to be learned is from Portia’s scary situation.

As we remember all too well, Portia had her suspicions about Jack as soon as he had too much to drink and started sharing cryptic, yet telling information. Like the fact that his “uncle” Quentin (Tom Hollander) was expecting to come into some money that may or may not have been wrapped up in Portia’s boss Tanya. She stayed with him, though. Feeling stuck. Feeling more stuck in the morning when her phone mysteriously went missing and he got upset when she borrowed his to call Tanya, who told her point blank, in a stunning moment of clarity, not to trust Jack because she saw him “kinda fu*king his uncle.”

After all this, Portia still got in a car with him — and this is the problem. As mom Kathryn VanArendonk wrote in a viral tweet, Portia’s predicament serves as a reminder to please just call your parents, or whoever you turn to in a crisis, when you feel like you’re in danger if you can. “Hi it's me, your mom,” VanArendonk tweeted, “if you ever end up in that situation just put the taxi on your credit card, your father and i will cover it.” Honestly, are you even a parent if you weren’t screaming “Damnit Portia, call your parents!” at your television?

But more importantly, as VanArendonk noted in a follow-up tweet, trusting your intuition is key at every stage of life. “At about age 14 my mom started giving me a lot of speeches that were like ‘intuition is real. if something feels off just leave’ and I, 14, thought this was RIDICULOUS,” she tweeted. “but she was trying to stop me from becoming portia!!!”

“Call me if you’re in trouble” is one of things you say as a parent so often that it might as well be your kid’s ring tone, which is not a terrible idea. When my oldest son became a teenager, I told him to call me if he was at a party and he couldn’t get home for whatever reason. Drinking, drugs, whatever. I would come get him at any time no consequences, no questions asked. He did call a few times. I picked him up and complained about him inside my brain but didn’t say a word.

If he was in Palermo and in potential danger of being kidnapped or murdered or trafficked? Yes, he should call me for help. Or even come up with other options to keep himself out of danger. Twitter had plenty of simple ideas for Portia. Like going to the hotel desk to tell them you’ve lost your phone, there’s an idea.

Or confronting someone who makes you uncomfortable in a public place. Not alone in a car... in a foreign country.

Portia somehow makes it home safely, but only because Jack has a change of heart and drives her to the airport. But let that be a lesson to us all. If you are in a scary situation of any kind, your parents want to help you and will do anything to help you. And parents, now you have a real teachable moment to share with your kids, thanks to Season 2 of The White Lotus. Teach your kids that if you feel like something is going wrong, believe your intuition. Even if someone is telling you everything is fine. You get to decide. Never be embarrassed to ask for help. Even if you’re in Italy with a cute guy who suddenly just seems sort of... off.

So, long story short, just trust your gut and call your mom.