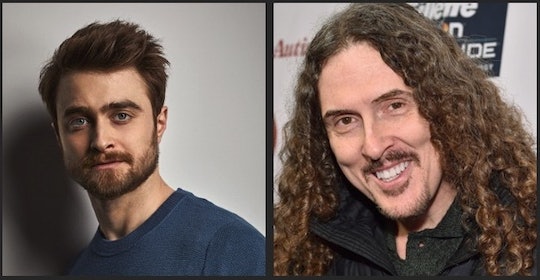 Everything We Know About The New Weird Al Biopic So Far

Daniel Radcliffe will be playing the king of parody pop.

When you hear “Weird Al,” the first thing that comes to mind will vary based on your age. Gen Xers might think of “Eat It.” Millennials? “Amish Paradise.” Gen Z? Very likely “The Hamilton Polka.” That’s just what happens when your career is as long-lived as “Weird” Al Yankovic’s. And now, after four decades, five Grammys, and six platinum albums, we’ll get to see the story behind the legend (kind of) in Weird: The Al Yankovic Story, coming to Roku in fall of this year, the performer’s first movie in 33 years. Here’s what you need to know.

Would you expect anything else from the man who brought you “Amish Paradise” and “Like A Surgeon”? But the dramatic biopic parody is the perfect vehicle for the “Al Yankovic Story” in more ways than one.

Over the years, the musician has become best known for his goofy pop culture spoof songs and expert use of that most underrated (and nerdy) of instruments, the accordion. He’s also well regarded in the entertainment industry as (to quote Daniel Radcliffe) “the nicest human,” whose PG, fairly wholesome image is not just his act. While substance abuse and emotional pathos pervade the lives of many successful musicians (and, more importantly for our purposes, the scrips of successful musician biopics), Yankovic has walked the straight and narrow since his star began to rise in the ‘80s. Famously, his episode of Vh1’s Behind the Music had to break with its usual “rise/fall from grace/redemption” format to accommodate his “anti-rock star” lifestyle. Of course, this makes the portrayal of him in Weird — a hard-drinking, abusive, tortured artiste — all the funnier.

The new film is written by Weird Al and Eric Appel.

Daniel Radcliffe stars as Yankovic, and was cast without ever having met the man. Radcliffe explained on Jimmy Fallon that he was excited and flattered by the offer, but was curious: why him? Apparently, Yankovic had seen Radcliffe on The Graham Norton Show perfectly performing Tom Lehrer’s “The Elements” (a song listing every element in the period table) “next to Colin Farrell and a very bemused Rihanna,” Radcliffe explained. “I guess Al saw that and was like, ‘This guy maybe gets it.’ And so he picked me. So I’m very, very lucky.’ Radcliffe describes filming Weird as “one of the most fun things I have ever done in my life.” Yankovic was similarly delighted. “I am absolutely thrilled that Daniel Radcliffe will be portraying me in the film,” he said in a statement, before cheekily adding, “I have no doubt whatsoever that this is the role future generations will remember him for.”

The movie also features Rainn Wilson as Dr. Demento, a California DJ who gave Yankovic his start in the late ‘70s; Rachel Evan Wood as Madonna (who is Yankovic’s love interest in the movie); and Abbot Elementary’s Quinta Brunson as Oprah Winfrey.

If all this is looking vaguely familiar to you... it might be. Weird is based on a Funny or Die short from 2010 starring Aaron Paul as Yankovic, Patton Oswald as Dr. Demento, Olivia Wilde as Madonna, and Gary Cole and Mary Steenburgen as Yankovic’s parents. But whereas Weird: The Al Yankovic Story will be a full length film, this was simply a trailer parody. But, as you can see, it hit all the “dramatic, chaotic, but ultimately uplifting rock-and-roll biopic” notes perfectly. Strained relationship with his father? Check. Passionate but dysfunction love affair? Check. Tensions with the band? Check. Substance abuse and arrest? Check, checkity, check.

The full-length movie is based on this 2010 joke trailer from Funny or Die.

Weird is not yet rated, but we know Weird Al’s style.

While the film has not yet been rated (and a release date has not yet been given), we have some clues about what to expect based on Yankovic’s 40+ year oeuvre, perhaps best described in the “Ask Al” section of his website where he discusses the family friendliness of his live shows...

I see every demographic in the audience at my life shows, from toddlers to geriatrics. And we do put on a “family-friendly” show... although that doesn’t mean it’s a squeaky-clean G-rated kiddie show. You should be aware there is some cartoon violence and a little bit of what some people might call “adult themes.” But there’s no harsh profanity, and nothing that I think you would find terribly offensive. As always, you should use your best judgement as a parent, but if your child wouldn’t be traumatized by, say, an issue of MAD Magazine or an episode of The Simpsons, I’m pretty sure he or she wouldn’t have any problems at all with my live show.

More Like This
10 Cozy, Romantic, & Drama-Filled Shows To Watch If You Love 'Virgin River'
Lions, Tigers, & Bears, Oh My! 'The Wizard Of Oz' Is Getting A Remake
25 Great TV Shows About School To Watch As A Family
What Parents Need To Know About Marvel's New She-Hulk Series Coming To Disney+