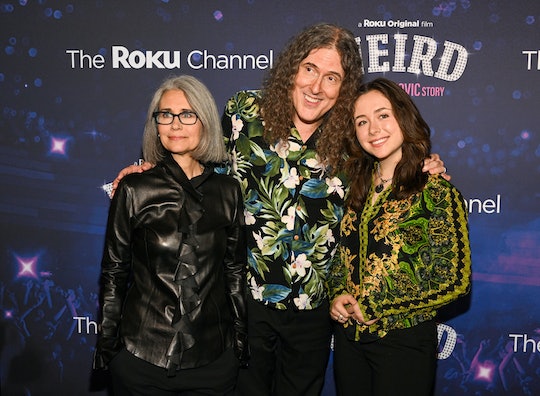 Al Yankovic Has Said That Marriage & Fatherhood Made Him “Happier”

Fans could be forgiven if they struggle to think of “Weird Al” Yankovic as a husband or a dad. After 40 years of spoofing pop culture songs and eventually becoming a cultural icon himself, he just sort of seems like a lovable goofball. He’s just “Weird Al.” In fact, Al Yankovic has been happily married for more than 20 years and is dad to one daughter. Turns out he’s more than just his music and a timeless commitment to Hawaiian shirts.

“Weird Al” fell for his wife, Suzanne, on the phone.

Television and film executive Suzanne Krajewski first met Yankovic when she was set up on a date with him by musician Bill Mumy. The two chatted for weeks on the phone before meeting in person, and Yankovic told Wired that he already had a crush on her before their first date. “Going to meet her for our first date, I was like, ‘I hope she’s cute, ‘cause I just might marry her,” he said in 2000.

While Yankovic was ready to head to the altar before they even met, Suzanne was a bit skeptical because of his public persona. “Then I thought, ‘That’s kind of shallow of me to just be looking at a persona. People are often so different than how they appear,’” Suzanne told Rolling Stone in 2014. “And we clicked immediately.”

Yankovic and Krajewski tied the knot in 2001, and right away she made some big changes in his life, including taking some of his old clothes to Goodwill. “She wound up wearing a few of the shirts I wore in high school, which I still had in my early 40s,” he told Vice in 2018. “And they fit her well; she looked great. She helped me stop hoarding stuff.”

Yankovic opened up to Rolling Stone about marrying a bit later in life and how it’s made him so much happier. “I guess we did get married a little late in life, but neither one of us had been married before and neither of us intends to be married again. I enjoyed being single. But when I got married I found I was even happier, and when I had a kid I was even happier, still.”

Yankovic became a father when daughter Nina was born in 2003. Now 19, Nina does not have a social media presence, but we know from her dad’s Instagram account that he dropped her off for her freshman year at college in September 2021. He does not share recent photos of her, instead focusing on flashbacks from when she was a little girl when writing birthday messages. Or for special occasions, throwback videos.

In honor of Nina’s 18th birthday in February 2021, Yankovic shared a hilarious video on Twitter of her as a little girl with her pet gecko on her nose. “Has anybody seen my gecko? I looked everywhere,” she said as the lizard crawled on her face. Like father, like daughter.

His wife and daughter attended the premiere of Weird: The Al Yankovic Story with him.

Both Suzanne and Nina were by his side at the premiere of Yankovic’s new biopic Weird: The Al Yankovic Story, starring Daniel Radcliffe as the man himself. (Suzanne even made a brief appearance in the movie, sitting next to the character Yankovic played, during an awards show that Radcliffe’s Weird Al attends.)

Nina might like to stay out of the spotlight, but when it comes to being there for her dad she certainly shows up looking proud as can be.