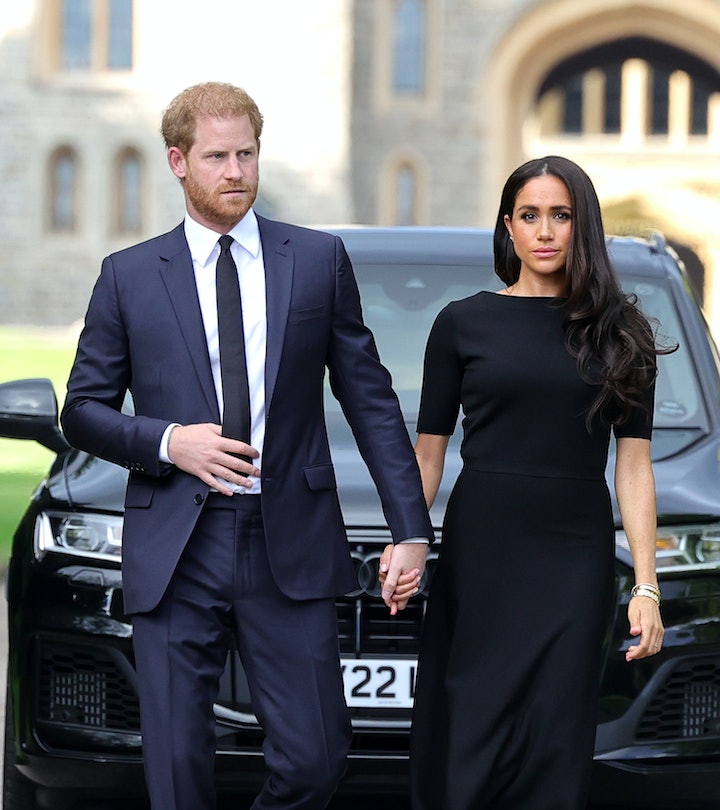 Meghan Markle and Prince Harry’s children remain as “Master” and “Miss” on the royal family’s website.

The death of Queen Elizabeth II has brought about a lot of changes in the royal family over the course of the past several days — as would be expected following the death of any matriarch of a large family, much less one who has sat on the throne of the United Kingdom for the past 70 years. Not least of which, the country has a new monarch, King Charles III. His accession set into motion a series of title changes throughout the royal family, including the rise of Archie and Lilibet — the children of his son Prince Harry and his wife Meghan Markle — to Prince and Princess... maybe.

Whether or not they have the right to style themselves as His/Her Royal Highness (HRH) is not a question. The rules (more on them in a minute) are unequivocal and clear. Nevertheless, there has been some question about why Prince George, Princess Charlotte, and Prince Louis’ titles have already been updated on the official royal family website — from “Prince(ss) of Cambridge” to “Prince(ss) of Wales” — and Archie and Lilibet remain “Master” and “Miss.”

Some have speculated family drama, pointing to King Charles’ previous statements about having a “slimmed down” monarchy. Others suggest that this may be more innocuous, relating to the wording of the rules themselves regarding who is and is not called a prince or princess.

A spokesperson for Buckingham Palace addressed the matter in a statement, per Hello! Magazine, “While the website was updated for the Waleses, clearly updating love on a website doesn't quite work so we've not quite done that but clearly he does love them,” they continued, somewhat nebulously, “We will be working through updating the website as and when we get information ... At the moment, we're focused on the next 10 days and as and when we get information, we will update that website.”

The rules regarding their titles can be found in what is referred to as the 1917 Letters Patent, penned by George V, who reigned from 1910 to 1936. Generally speaking, Letters Patent refer to a kind of legal document that can grant, among other things, a title to a person. The 105-year-old decree stipulates that children of the son of a monarch may use the styling “His/Her Royal Highness” or “HRH” if they wish, as well as the eldest son of the eldest son of the Prince of Wales. (In 2013, Queen Elizabeth changed some rules of succession, which also granted such titles to any children born to the eldest son of the Prince of Wales, not just the eldest.) The wives of princes could also style themselves as “Princess.” (Husbands of princesses, however, do not get the same honor.)

Now that there’s a new monarch, other titles change as well depending on a person’s relationship with him. The Duke and Duchess of Cambridge — Prince William and Kate Middleton — for example, are now styled the Prince and Princess of Wales, the title appointed to the heir apparent and his spouse. (They’re still the Duke and Duchess of Cambridge, but in the royal family you lead with the most impressive and high-ranking title.)

Prince Harry, as the second son of the of the reigning monarch, remains the Duke of Sussex, but since he is now the son of the King rather than the grandson of the Queen, his children now have the option of styling themselves Prince and Princess if they choose. And if they choose, there’s a catch...

With the HRH styling comes an obligation to work in an official capacity for the House of Windsor. In other words, become a “working member of the royal family.” As far as we can tell it’s officially unofficial... but is upheld pretty universally. When Harry and Meghan stepped down as working royals in 2020, they lost their official HRH designations. So it’s unlikely Archie and Lilibet would take them up, at least any time soon.

There is certainly precedent for a royal with the right to use the HRH styling and choosing not to. Prince Edward’s children, Lady Louise Mountbatten-Windsor and James, Viscount Severn, who are 18 and 14 respectively, could use their Princess and Prince titles at any point but have so far chosen not to. “We try to bring them up with the understanding that they are very likely to have to work for a living,” their mother, Countess Sophie of Wessex told The Sunday Times in 2020. “Hence we made the decision not to use HRH titles. They have them and can decide to use them from 18, but it’s highly unlikely.”

So, while it’s fun to think of those two little cuties as “Prince Archie” and “Princess Lilibet” officially, it very well might not be happening any time soon... or ever.