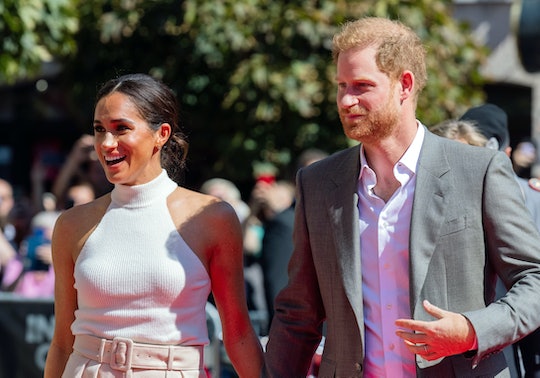 Queen Elizabeth’s death at the age of 96 will change the royal family in so many ways. Perhaps of the most notable way being that her son became King Charles III as soon as she died in Scotland at Balmoral Castle, surrounded by her family. His shift from prince to king also means several other changing titles in the royal family, as well as two new ones. Meghan Markle and Prince Harry’s son Archie Harrison and daughter Lilibet Diana could be known from now on as Prince Archie and Princess Lilibet. Or at least, that’s how it should go based on royal history at any rate.

Because Prince Charles became the new monarch upon his mother’s death, a rule laid out by King George V in 1917 decreed that the grandchildren, not great-grandchildren, of the Sovereign “shall have and enjoy in all occasions the style and title enjoyed by the children of Dukes of these Our Realms.” As Prince Harry is the son of Prince Charles, this would automatically make his children eligible to be called HRH, His/Her Royal Highness.

Prince Archie and Princess Lilibet both have quite a lovely ring to them.

Whether or not the youngest grandchildren of King Charles III will use their titles is still anyone’s guess. Certainly Markle said in an interview with Oprah Winfrey in 2021 that she and Prince Harry had hoped their son would be granted the title of prince for “security” reasons and were denied prior to his birth. The couple have given up their own HRH titles since stepping down as senior royals and now live in Montecito, California with their 3-year-old son and 1-year-old daughter, so it’s perfectly possible that they won’t be interested in their children holding these royal titles.

There is also the possibility that King Charles will decide not to allow those titles to be used. Rumors of his plans to foster a “slimmed-down” monarchy with fewer working royals could see him decide to take their royal titles away from them. If so, he would have to issue a Letters Patent to bar his grandchildren from using those titles, which does not sound like a great idea if he hopes to mend fences within his fractured family.

We will have to wait and see. But for now, Prince Archie and Princess Lilibet are in California. The little royals of Montecito.

More Like This
Prince Louis Is Asking His Parents Questions As He Tries To Understand Queen Elizabeth’s Death
Queen Elizabeth II's Most Romantic Quotes About Prince Philip
Queen Elizabeth's Corgis Will Be "Spoiled Rotten," According To Prince William
Kate Middleton Honored Queen Elizabeth & Princess Diana At Her Majesty's Funeral