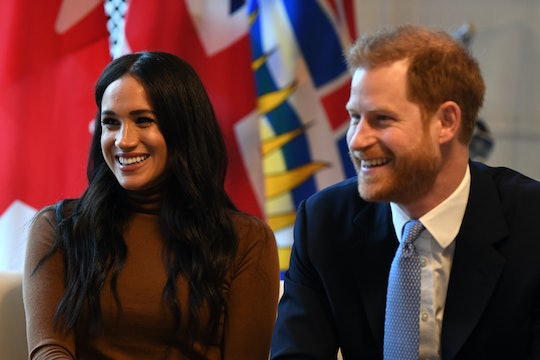 Well for once it seems some of the speculation around the royal family actually turned out to be true. On Wednesday, Meghan Markle and Prince Harry announced their plans to step down as senior members of the royal family and are even planning to move to North America. While it might seem as though it was a bit of an inevitability to some of their fans, it's not something that tends to happen. Like, almost ever.

In the two years since Prince Harry announced his engagement to Markle, the couple have been severely plagued with attacks from the British tabloids. After their royal wedding in May 2018 and then the birth of their first child, baby boy Archie Harrison, in May 2019, things seemed to get worse.

Earlier this year, the couple opened up about their struggles in a documentary about their royal trip to Africa in an ITV documentary Harry & Meghan: An African Journey, and went so far as to file lawsuits against two of the newspapers who had been writing about them. After taking a six week break over the holidays on the west coast of Canada, it seems the couple came to a serious decision about how they would like to lead the rest of their lives.

On Jan. 8, the Duke and Duchess of Sussex announced on Instagram that they would be stepping down as senior members of the royal family and work towards becoming "financially independent."

"After many months of reflection and internal discussions, we have chosen to make a transition this year in starting to carve out a progressive new role within this institution," their announcement began. "We intend to step back as ‘senior’ members of the Royal Family and work to become financially independent, while continuing to fully support Her Majesty The Queen. It is with your encouragement, particularly over the last few years, that we feel prepared to make this adjustment."

They went on to explain that they intend to divide their time between North America and the United Kingdom in an effort to raise their son with "an appreciation for the royal tradition into which he was born, while also providing our family with the space to focus on the next chapter, including the launch of our new charitable entity."

Prince Harry and Markle made it clear that they plan to continue to collaborate with the royal family in the future, including Prince Harry's brother Prince William and his wife Kate Middleton. "We look forward to sharing the full details of this exciting next step in due course, as we continue to collaborate with Her Majesty The Queen, The Prince of Wales, The Duke of Cambridge and all relevant parties," the statement continued.

The rest of the royal family has yet to release comments regarding this decision, although a Buckingham Palace spokesperson had refused to say anything about the "speculation" on the subject of a potential Sussex move to Canada earlier on Wednesday, according to The Daily Mail.

The Duke and Duchess of Sussex will join a very short list of senior members of the royal family who have stepped away from their roles. Other than Prince Andrew, who stepped back from his public royal role in 2019 amid allegations that he was involved in the Jeffrey Epstein scandal, the last member to step away was King Edward VIII in 1936 when he abdicated his throne to marry Wallis Simpson.

In the case of Prince Harry and Markle, they are rather unique in that they're stepping away as a conscious choice rather than based on any scandal. They appear to be making an effort to carve their own path, and while I'm sure their decision will be met with massive criticism, I think they'll stay the course. They appear to know what they want, and what they want is to be able to make their own lives. Good for them.