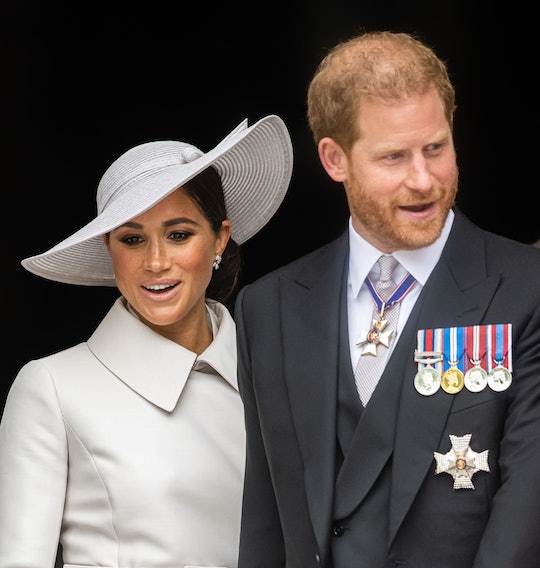 Everything We Know About Meghan & Harry’s Daughter Lilibet So Far

Did you know she was a skunk for Halloween? And she has red hair!

When Meghan Markle and Prince Harry announced last year that they were expecting their second child, a daughter, royal watchers on both sides of the pond rejoiced. Their son, Archie, would become a big brother, and what’s more, this would be only the second royal baby in history to be born in the United States. The first was Maud Windsor, granddaughter of Prince and Princess Michael of Kent, who was also born in California in 2013, although little Lilibet “Lili” Diana is the first baby in the line of succession to be born on American soil.

When Meghan and Harry announced the birth of their second child, Lilibet “Lili” Diana Mountbatten-Windsor, on June 4, 2021, they did so as private citizens living in Montecito, California. That must have felt like a big change for them after living life as senior members of the royal family. Now they are parents of two. Little Lili’s arrival made them, as they explained in December 2021, “a family” after Archie made them “mama and papa.” In her first year, Lilibet has been keeping her parents, and us, entertained.

So what do we know so far about little Lili?

In a brand new photo of Lilibet, taken on her first birthday party at Frogmore Cottage, we can see that Meghan and Harry’s little girl has red hair, just like her dad. “It was such a privilege to celebrate the 1st birthday of Lilibet with my family and hers!” photographer Misan Harriman, who’s photographed the couple numerous times, shared on Twitter. “Joy and face painting all around.”

The Duke and Duchess of Sussex, along with Lili and their 3-year-old son Archie, were recently in the UK for Queen Elizabeth’s Platinum Jubilee. While there, Lilibet celebrated her first birthday on June 4 at an “intimate backyard picnic” at the couple’s old home , Frogmore Cottage, according to royal reporter Omid Scobie.

Lilibet was walking at 10 months old.

At nearly 11 months old, it seems little Lilibet was on the move. Prince Harry spoke to People in a rare interview to support the Invictus Games and shared a little behind-the-scenes tidbit about his daughter’s biggest milestone yet, which had everything to do with big brother Archie. “Her current priorities are trying to keep up with her brother; she took her first step just a few days ago,” the excited dad told the magazine. “Proud papa, here.”

No word on how Archie feels about his sister trying to keep up with him.

The Duke and Duchess of Sussex shared their first portrait as a family of four at their home in Montecito, California, for the holiday season. Taken by photographer Alexi Lubomirski, the photo sees Lilibet in a sweet pink dress, held aloft by her mom and laughing away, looking like the sweetest, happiest little baby around. She was joined by big brother Archie, who looked just like his dad, right down to the ginger hair and everything.

Lili dressed as a skunk for Halloween.

Meghan Markle revealed Lilibet was a skunk for Halloween.

Meghan sat down with Ellen DeGeneres in November and talked about her baby girl’s first Halloween. Big brother Archie was dressed as a dinosaur for “maybe five minutes,” according to his mom, while DeGeneres noted Lili was “a skunk.” Meghan elaborated that her daughter was a very specific skunk. “Like Flower from Bambi.”

She’s gone through the trials of teething.

In that same interview with DeGeneres, Meghan admitted that she was going through a very relatable struggle with her baby girl. “Lili is now teething,” she told the sympathetic audience, adding that she was looking for “anything to relieve that.”

DeGeneres recommended “tequila,” but it didn’t seem like Meghan was taking the bait.

Meghan and Harry were overjoyed after Lilibet’s birth.

In a letter to Congress advocating for paid parental leave in October 2021, Meghan wrote that she and her husband were “overjoyed” to welcome their baby girl. “In June, my husband and I welcomed our second child. Like any parents, we were overjoyed,” Meghan wrote in her letter, going on to explain that their joy was mixed with other emotions, “Like many parents, we were overwhelmed. Like fewer parents, we weren’t confronted with the harsh reality of either spending those first few critical months with our baby or going back to work.”

Prince Harry and Lilibet have a sweet bedtime routine.

Prince Harry is reportedly loving his new role as a girl dad, according to a source close to the couple, and has come up with a sweet way to put his daughter to sleep at night. “Harry adores Lili and loves reading her bedtime stories and rocking her to sleep. He has a real magic touch.”

During a visit to New York City in September, Meghan was asked to give an update on her then-3-month-old baby girl. “She’s beautiful,” was all she said at the time. And perhaps that says it all.

Lilibet is eighth in line for the throne.

Lilibet was added to the line of succession in July 2021, behind her father and big brother and, of course, her three Cambridge cousins, Prince George, Princess Charlotte, and Prince Louis. She is currently eighth in line for the throne, which is pretty far down. But she’s the only one to carry her great-grandmother’s beloved nickname, so she always has that.

Meghan and Harry sent photos of Lili via text.

Meghan and Harry’s relationship with the royal family has been a hotly debated subject over the past few years, particularly after they sat down for an intimate interview with friend and neighbor Oprah Winfrey. But a source close to the couple told Entertainment Tonight little Lilibet’s picture has been shared with the entire royal family via a group text. She might be on the other side of the ocean, but her royal family members still got a bird’s eye view.

But Queen Elizabeth got the first view.

The 94-year-old monarch and matriarch of the family got to meet her special little namesake before anyone else, via video call. Clearly the baby made an impression, because the entire royal family took to their social media to welcome baby Lili to the family.

Archie is a proud big brother.

Little Archie might still be a toddler himself, but he was reportedly “very excited” to become a big brother to Lilibet.

Her name honors her grandmothers.

The Duke and Duchess of Sussex explained the incredibly special meaning behind their daughter’s name when they announced her arrival on their Archewell website: “Lili is named after her great-grandmother, Her Majesty The Queen, whose family nickname is Lilibet. Her middle name, Diana, was chosen to honor her beloved late grandmother, The Princess of Wales.” As for Markle’s own mother, Doria Ragland, the name could be a way to honor her as well. Ragland’s nickname for Markle was “Flower” as a child, and of course, Lili is a flower. How perfect.

This article was originally published on Jan. 8, 2022