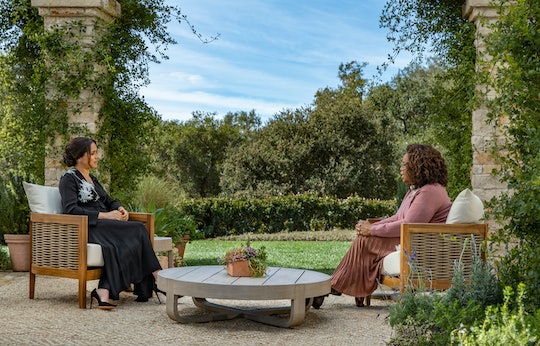 If you've been wanting a glimpse into the new California life of the Duke and Duchess of Sussex, we were thankfully given a look at Meghan Markle and Prince Harry's Montecito backyard during their highly anticipated interview with Oprah Winfrey. And this is where we were treated to their son Archie's "Chick Inn" coop, shown off by Prince Harry in a pair of rubber boots. Yes, it was wonderful.

The Duke and Duchess of Sussex took Winfrey on a tour of their beautiful yard in Montecito, California, where they are actually neighbors. Markle's sweet rescue dog Guy, who she says she adopted from a Kentucky "kill shelter" years ago, happily greeted the two women as they made their way back to say hello to Prince Harry, who was busy working in the family's new chicken coop, adorable called "Archie's Chick Inn, established 2021." Which is, of course, pretty perfect for the little Sussex family since they just moved into their new home last summer.

After being born in the United Kingdom, the son of the son of the heir to the throne, this life in California looks very different for little Archie. Instead of private school, castles, and all of the rest of the trappings of the life of a royal child, this little guy has his own chicken coop. And it's perfectly splendid.

While Prince Harry and Markle got very emotional during their interview, talking about their struggles with the media, their difficulties leading them to step away from their senior roles, and more, this little moment was a bright spot.

Social media users were all about that sweet moment, with people sharing messages like, "I refuse to believe anyone that worked at a place named Humphrey Yogart and has a chicken coop named ‘Archie’s Chick Inn’ is any kind of a monster." (For those who didn't watch, Markle's first job was at a yogurt shop called Humphrey Yogart.) Another wrote, "'archie's chick inn' is the hottest 2021 club, all other establishments are canceled i do not make the rules."

I think we can all agree that Archie deserves his Chick Inn. And so do his parents.