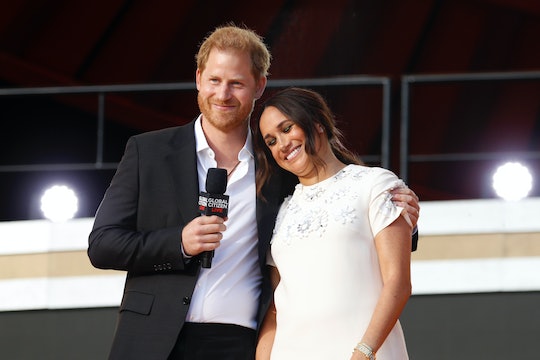 Meghan Markle Shared A Tiny Update About Her Daughter Lilibet

But we’re still patiently waiting on an official photo of Archie’s sister!

Prince Harry and Meghan Markle are currently in an empire state of mind on their tour of New York City, but it’s clear they’re always thinking of their baby girl back at home. In fact, just last week, the Duchess of Sussex gave a small but very sweet update on her daughter Lilibet “Lili” Diana.

While visiting One World Trade Center last Thursday, Meghan was asked by a reporter how Lilibet, now 3 months old, was. “She's beautiful!” the Duchess of Sussex replied, as Cosmopolitan reported. The reporter also asked about their on their 2-year-old Archie to which Meghan gave a grin and a big thumbs up.

This little update about Lilibet wasn’t much, but it’s still exciting considering that the Duke and Duchess of Sussex have not yet released an official photo of their new baby to the public or many details about life at home with heir daughter.

Lilibet “Lili” Diana Mountbatten-Windsor was born in June. Baby Lili, who is named after her grandmother, Princess Diana, and her great-grandmother, Queen Elizabeth II, has yet to see her royal family but that may change for the upcoming holidays. According to Marie Claire, the Sussexes are planning to return to the UK for Christmas this year. Meghan and Harry have not spent Christmas in the UK since 2018 as they spent the holidays in Canada in 2019 and travel restrictions prevented them from returning in 2020.

“Christmas is being looked at as an opportunity,” Katie Nicholl, the royal editor for Vanity Fair told the UK publication, Closer. “There may be a softening, which could pave the way for a healing of the family rift.” Nicholl added it’s a good opportunity for the family to set aside their differences and their matriarch would want nothing less. “It’s certainly what the Queen wants. Prince Charles would like to see his grandchildren. A meet-up suggests they hope to move on and sort things out,” Nicholl told the publication.

In the meantime, Meghan and Harry are enjoying their time in the Big Apple. While there, the Sussexes have made appearances at the Global Citizen Live concert and tried chicken and waffles for the first time in Harlem. Meghan also read her new children’s book, The Bench, to kids at a school in Harlem.