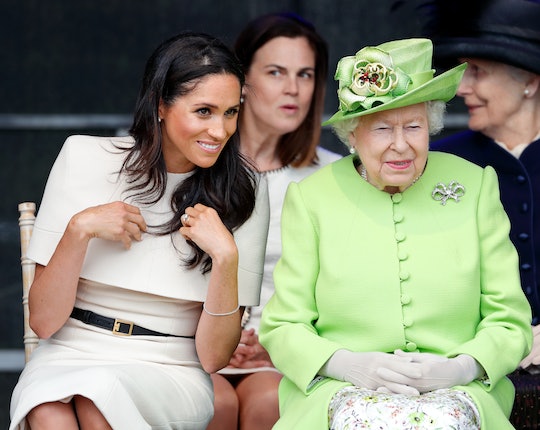 What Does Lilibet Mean? The Meaning Behind Meghan Markle & Prince Harry's Daughter's Name

It’s a tribute to the women in the family.

Archie Harrison Mountbatten-Windsor is officially a big brother now that his parents welcomed their little girl on Sunday. It’s an exciting time for the family, and of course everyone else on the planet who simply cannot stop speculating about every single move they make. Particularly when it comes to their new daughter’s name. Prior to the birth of their sweet little girl, Meghan Markle and Prince Harry’s name choice was hotly debated. And now that it’s been revealed to be Lilibet Diana Mountbatten-Windsor, people are still grappling with the meaning behind it.

The Duke and Duchess of Sussex announced on Sunday, “It is with great joy that Prince Harry and Meghan, The Duke and Duchess of Sussex, welcome their daughter, Lilibet 'Lili' Diana Mountbatten-Windsor, to the world,” per the couple’s Archewell website, “Lili was born on Friday, June 4 at 11:40 a.m. in the trusted care of the doctors and staff at Santa Barbara Cottage Hospital in Santa Barbara, CA. She weighed 7 lbs 11 oz. Both mother and child are healthy and well, and settling in at home.”

So where did they come up with the name Lilibet Diana? “Lili is named after her great-grandmother, Her Majesty The Queen, whose family nickname is Lilibet,” the statement explained, “Her middle name, Diana, was chosen to honor her beloved late grandmother, The Princess of Wales.”

The royal family all took the time to welcome baby Lilibet.

As a little girl, Queen Elizabeth was called Lilibet by her father, King George VI, who was once quoted as saying of his two daughters, “Lilibet is my pride, Margaret is my joy,” per The Independent. Queen Elizabeth’s late husband Prince Philip was also prone to use this nickname for his wife. Of course, the middle name “Diana” is an obvious tribute to Prince Harry’s late mother Princess Diana, who tragically died in a car accident in Paris when he was just 12 years old. Some people thought the couple might name their little girl Diana, but friends close to the couple said prior to Lili’s birth that they worried the pressure would be too much for her. It should be noted that Lilibet’s Cambridge cousin, 6-year-old Princess Charlotte, is also named for her grandmother and great-grandmother with the name Charlotte Elizabeth Diana, per ABC News.

The use of Lilibet rather than Elizabeth not only gives the Queen’s 11th great-grandchild a sweet nickname, it’s also a lovely nod to Prince Harry’s personal relationship to his grandmother. It can be tough to remember that the royal family is actually a family and not just the monarchy, with relationships and nicknames that are meaningful to them. And certainly the Queen herself was “delighted” by the news when the Royal Family Instagram account posted the message, “Congratulations to The Duke and Duchess of Sussex on the birth of Lilibet Diana! The Queen, The Prince of Wales and The Duchess of Cornwall and The Duke and Duchess of Cambridge are delighted with the news. Lilibet is Her Majesty’s 11th great-grandchild.”

Whatever else the world might think of their relationship, Lili is still Queen Elizabeth’s great-grandchild. And now her namesake.

More Like This
Prince Harry Is A Proud Girl Dad & He’s Got The T-Shirt To Prove It
Kate Middleton Keeps Getting “Broody” Around Adorable Babies
It's Official: Lilibet Will Meet Queen Elizabeth In Person For The Very First Time
Meghan Markle Made A Mic Drop Statement About What Working Moms Really Need