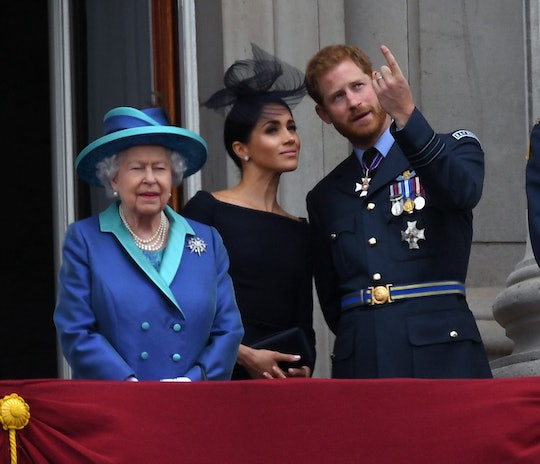 The Queen Met Her Newborn Namesake Lilibet On a Video Call

Meghan Markle and Prince Harry were “excited” to introduce them.

No one wants to schedule a meeting on the day they give birth, but when it’s Queen Elizabeth herself you make an exception. Especially when you just delivered her 11th great-grandchild and oh yes, named your baby after her own beloved nickname. People reports that Queen Elizabeth has already been introduced to Meghan Markle and Prince Harry’s daughter Lilibet “Lili” Diana Mountbatten-Windsor, and everyone involved was apparently “excited” for the new addition to the royal family.

The Duke and Duchess of Sussex announced the arrival of a little sister for their 2-year-old son Archie on Sunday via their Archewell website, explaining that she was born at Santa Barbara Cottage Hospital in Santa Barbara, close to their new home in Montecito, California. They went on to explain the provenance of the name Lilibet Diana, “Lili is named after her great-grandmother, Her Majesty The Queen, whose family nickname is Lilibet. Her middle name, Diana, was chosen to honor her beloved late grandmother, The Princess of Wales.”

Queen Elizabeth’s own father, King George VI, gave her the nickname as a young girl, and her late husband Prince Philip continued the tradition throughout their seven decades of marriage.

Now there’s a new little Lilibet in the family, and one of the first orders of business after her birth was meeting her royal great-grandmother. The couple reportedly spoke with Queen Elizabeth via video on Sunday, a source told People, and "were very excited and couldn't wait to share that their daughter arrived" as soon as they arrived home from the hospital. For her part, Queen Elizabeth joined the rest of the royal family in sharing their “delight” at the news of a new royal baby on Instagram, “Congratulations to The Duke and Duchess of Sussex on the birth of Lilibet Diana!” the post read, “The Queen, The Prince of Wales and The Duchess of Cornwall and The Duke and Duchess of Cambridge are delighted with the news. Lilibet is Her Majesty’s 11th great-grandchild.”

Prince Harry and Meghan Markle’s decision to step away from their senior royal roles made their relationship with the monarchy uncomfortable, but that doesn’t mean they’re on the outs with the family itself. He told James Corden back in February that he and Queen Elizabeth kept in frequent touch via Zoom, with Her Majesty even sending Archie a waffle maker for Christmas.

How lovely that they were able to introduce Lilibet the First to Lilibet the Second across the miles.

More Like This
It's Official: Lilibet Will Meet Queen Elizabeth In Person For The Very First Time
Meghan & Harry Celebrated Their Anniversary As A Family Of Four For The First Time
Why Prince Harry Feels Lucky To Be A "Father With A Platform"
Prince Harry Is A Proud Girl Dad & He’s Got The T-Shirt To Prove It