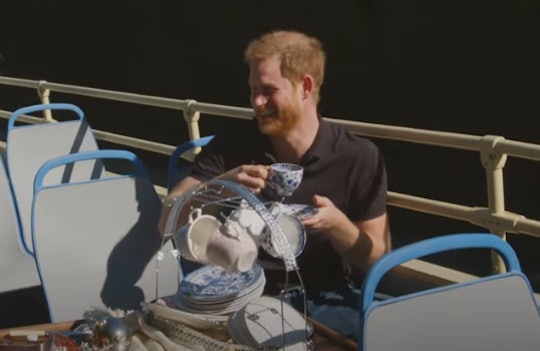 He even got in a dad brag about Archie's first word!

In a surprisingly and delightfully forthcoming interview with James Corden on The Late Late Show, Prince Harry talked about Archie, falling in love with Meghan Markle, and what his grandmother, Queen Elizabeth II, got his son for Christmas. Truly, everything about the Duke of Sussex's interview with the talk show host and fellow Brit as they toured around Los Angeles in an open-air bus was just charming.

Prince Harry recently joined Corden for his first-ever trip on a tour bus to see the sights of Los Angeles and talk about his new life in California with Markle, who is currently pregnant with their second child, and their son Archie. Before settling down in Santa Barbara and stepping back from his senior royal duties, Prince Harry's life was one of rules, titles, and more. This new interview — whilst drinking tea, chatting openly and even letting Corden have a quick FaceTime chat with his wife — certainly showed a different side of the Duke of Sussex we haven't gotten to see before. Here are 14 of the best takeaways and things we learned.

1. He Knew Meghan Was "The One" On Their Second Date

"It wasn't so much where we went, it was the fact that we hit it off with each other," Prince Harry told Corden. "And we were just so comfortable in each other's company." He went on to share that dating as a royal can often feel like things are "flipped upside down."

"All the dates become dinners, or watching TV, or chatting at home. And then eventually once you become a couple, you venture out to dinners and the cinema and everything else," he shared. Because they got to spend "an enormous amount of time, just the two of us," there were no distractions. The couple, of course, were married in 2018 and have been going strong ever since.

For those of you who've been wondering how little Archie is doing, the 20-month-old son of the Duke and Duchess of Sussex sounds like he's thriving. During the interview, Prince Harry described the family's evening routine. "We do Archie's tea, give him a bath, read him a book, put him down."

The rest of the couple's evening will sound familiar to your own. As Prince Harry told Corden, "Meg might cook a meal, or order takeaway, go upstairs, sit in bed, turn the TV on, watch Jeopardy!, watch a little bit of Netflix." So basically the same routine as every parent of a toddler.

4. He's Not Really Bothered By The Crown

And speaking of Netflix... Corden really went there. He asked Prince Harry how he felt about the series The Crown, which most recently focused on the storyline of his mother Princess Diana's early days in Buckingham Palace. "They don't pretend to be news. It's fictional. But it's loosely based on the truth. Of course it's not strictly accurate, but loosely... it gives you a rough idea about what that lifestyle, what the pressures of putting duty and service above family and everything else, what can come from that."

5. He Has An Actor In Mind To Play Him In The Crown

Prince Harry went on to say, "I'm way more comfortable with The Crown than I am seeing the stories written about my family or my wife or myself." He even had an idea for who he thought could play him in the series. Damien Lewis.

7. The Queen Gifted Archie A Kitchen Gadget For Christmas

The news is constantly full of stories about the rift between the Duke and Duchess of Sussex and the rest of the royal family, particularly since they moved to California and are no longer working royals. But that doesn't mean they've been kicked off the Christmas list by the Queen. Especially not her great-grandson Archie. As Prince Harry told Corden, "My grandmother asked us what Archie wanted for Christmas, and Meg said 'a waffle maker,' and she sent us a waffle maker."

Queen Elizabeth's waffle maker has apparently been a big hit with her great-grandson. According to his dad, the little boy loves it, "Archie wakes up in the morning and goes 'waffle?'"

"So at breakfast now, Meg makes up a beautiful organic mix, in the waffle maker, flip it, out it comes," Harry told Corden. "He loves it. And now I have waffles for breakfast, bit of yogurt, bit of jam on top—I don't know if that's the right thing to do—bit of berries maybe, a little honey, maybe some syrup."

9. Tabloids Were "Destroying" His Mental Health

When Corden asked Prince Harry why he felt he had to "walk away" from the royal family, the youngest son of Princess Diana responded, "It was never walking away. It was stepping back rather than stepping down."

"It was a really difficult environment, as I think a lot of people saw; we all know what the British press can be like," he went on to say, calling the tabloids "toxic." "And it was destroying my mental health. So I did what any husband and what any father would do. I need to get my family out of here."

10. He Has No Plans To Walk Away From The Royal Family

Despite the distance from the royal family, Prince Harry made it clear that he will "never walk away."

"I will always be contributing, but my life is public service. So wherever I am in the world, it's going to be the same thing."

He's living in California but still has Zoom chats with the royal family. Prince Harry told Corden, he has chatted with both Queen Elizabeth and Prince Philip on Zoom, and his grandfather has a decisive way of ending the Zoom meeting. "My grandfather, instead of pressing leave meeting he just goes [Prince Harry mimics closing a laptop]. I am like 'bye' as I'm pressing — and he just goes [closes the laptop]."

12. Meghan's Nickname For Harry Is Adorable

When Corden spoke to Markle on FaceTime, ostensibly to encourage her to buy the Fresh Prince Of Bel-Air house, she asked her husband, "Haz how's your tour of L.A. going?" Corden teased Prince Harry about the nickname and said, "I didn't know we were calling you 'Haz' now," and Prince Harry responded, "Well, you're not my wife, so... "

Corden found Markle under the simple letter "M" in Prince Harry's phone. Almost like she's the boss of the whole letter and I love it.

When describing his new life as a dad, Prince Harry could barely contain his glee talking about his funny little boy, "He is hysterical. He's got the most amazing personality."