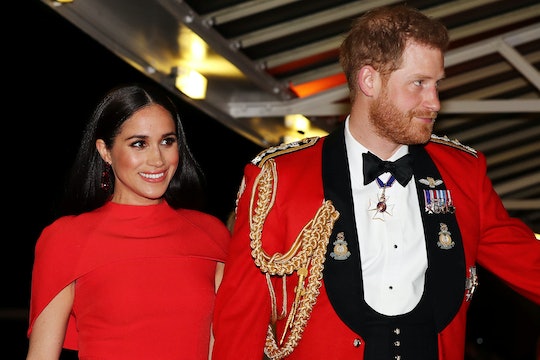 But they are still "much loved" members of the family.

We all saw it coming, but now it's official. Meghan Markle and Prince Harry are no longer working members of the royal family. Buckingham Palace released a statement on Friday with the news that the Duke and Duchess of Sussex have told Queen Elizabeth that they will not be returning to their royal duties at any point in the future.

Last January, Markle and Prince Harry announced their plans to step away from their senior royal roles. "We intend to step back as ‘senior’ members of the Royal Family and work to become financially independent, while continuing to fully support Her Majesty The Queen," the couple said in a statement at the time. Sine then, they went on to move to the west coast of Canada for a brief period before settling permanently in Montecito, California. Now it seems they are in California to stay.

"The Duke and Duchess of Sussex have confirmed to Her Majesty The Queen that they will not be returning as working members of The Royal Family," a statement released by Buckingham Palace on Friday read.

"Following conversations with The Duke, The Queen has written confirming that in stepping away from the work of The Royal Family it is not possible to continue with the responsibilities and duties that come with a life of public service," the statement continued. "The honorary military appointments and Royal patronages held by The Duke and Duchess will therefore be returned to Her Majesty, before being redistributed among working members of The Royal Family."

"While all are saddened by their decision, The Duke and Duchess remain much loved members of the family," the statement concluded

While the couple will no longer use the word "royal" in their correspondence, a decision that was made in 2020 when they initially announced their severance from the royal family, it does appear they will continue to hold their titles as Duke and Duchess of Sussex. Prince Harry's mother Diana continued to be the Princess of Wales after her divorce from Prince Charles, for example, while Sarah Ferguson remained Duchess of York after her split from Prince Andrew.

As for their charitable works, Sky News reported that Markle and Prince Harry released a statement indicating their plans to remain steadfast in their works of service. "As evidenced by their work over the past year, The Duke and Duchess of Sussex remain committed to their duty and service to the UK and around the world, and have offered their continued support to the organisations they have represented regardless of official role. We can all live a life of service. Service is universal," the statement read.

One of Markle's favored patronages, Smart Works in the United Kingdom, was quick to share the news that she would continue her work with the charity offering vulnerable women help getting back into the workplace. "We are delighted to confirm that The Duchess of Sussex will remain a Patron of Smart Works," Smart Works said on Twitter. "We are thankful for everything she has done in support of our clients and look forward to working together in the future."

The news of their official split from the royal duties comes less than one week after the couple announced that they're expecting their second child. A child who will be born as a private citizen, far from the royal family. A child who, according to Gambling.com, people are betting could potentially be named Diana.