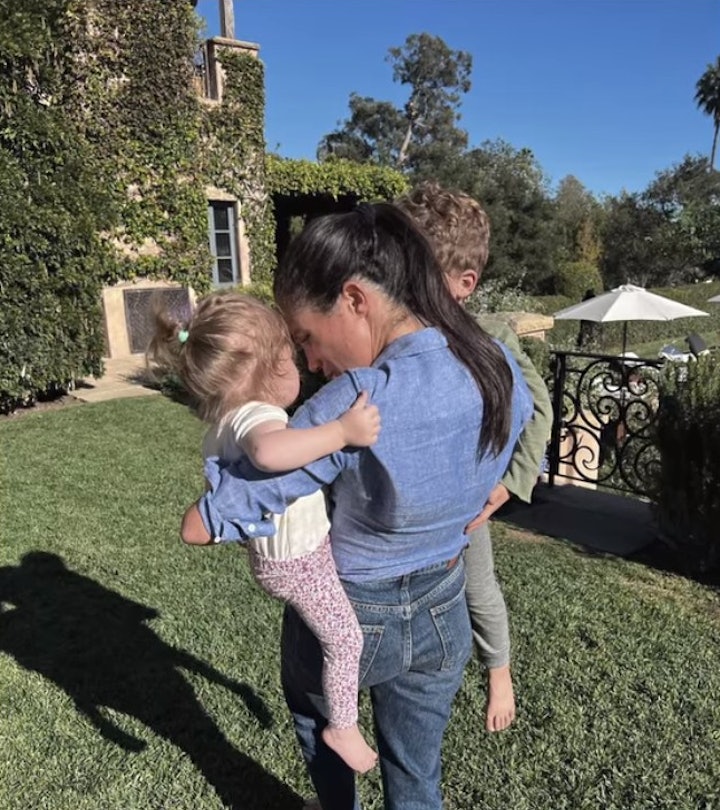 The sweet collection of baby photos comes from their their daily lives.

The new Netflix docuseries Harry & Meghan has promised a never-before-seen look at life and love story of Prince Harry and Meghan Markle, the Duke and Duchess of Sussex. In addition to personal photos from their courtship, wedding, and marriage, the pair have included sweet photos of their two children, Archie and Lilibet, to bring their whirlwind story to life.

Archie Harrison Mountbatten-Windsor was born in May of 2019 and followed the trajectory of babies born to senior members of the royal family. He was introduced to the world at a formal press occasion at Windsor Castle when he was two days old (not, in front of the hospital where he was born, as Prince Charles and Princess Diana as well as Prince William and Kate Middleton had done following the births of their own children a decision, we now know was an issue for the Sussexes), complete with posed pictures and full hair and make-up treatment for mom and dad. (We’re still in awe of the fact that Meghan wore a pure white dress a literal day after giving birth: she’s demonstrated a lot of bravery over the years but this might top them all.) But their daughter, Lilibet “Lili” Diana Mountbatten-Windsor, was born after the couple stepped down as “working royals” and moved to California, which freed them from many of the constraints placed on them previously. As such, Lilibet, who was born in May, did not have a photograph of her publicly released until December of that year in the Sussex family Christmas card.

Harry & Meghan uses footage and photos of the Sussex children sparingly, which is understandable given the couple’s relationship with the press and Harry’s childhood of being hounded by paparazzi (something he discusses as being a key feature of his early memories in the docuseries). That said, the family is comfortable sharing some sweet moments from their lives that include their children sprinkled in, almost as a backdrop, to the larger narrative. Milestones like Archie’s birthday...

...or Lili’s birthday (Archie was kind enough to help the 1-year-old with her candles)...

... and super early moments with little Lilibet (whom the couple mainly refers to as Lili).

We also saw the kind of one-in-a-million family photos a lot of us have hanging up in our homes, like this sweet “father-son” picture or Harry and Archie...

... Archie in the tub? A tiny infant portrait of Lily? A perfectly composed, seemingly serendipitous shot of the whole family? Priceless.

We love this one of Archie cuddling up with his unborn sister. We don’t want to project but Meghan’s glow in this photo, taken after she and Harry had made the move to the United States, feels as though it speaks to a sense of contentment and freedom that hadn’t been possible in her life in London.

Other photos featured (many getting an artful black and white treatment) capture quiet family moments — riding in cars, reading together, or playing in the yard.

Toddling along...Netflix
How many of us have pictures like this on our phone?Netflix
Little kisses for a little baby.Netflix
An all-American boy.Netflix
Do fairytales hit different when you’re a princess...?Netflix
Royal guard dog on Archie watch.Netflix
1/6

We’re not certain which of the couples two babies this is, but it highlights something about how they’re featured in the series — they’re often shown in profile, or at the very least not directly facing the camera. Despite being open enough to share some photos, it remains clear that the Sussexes put a premium on their children’s privacy.

The series also captures some day-to-day video footage of the children, like Archie taking a walk with his parents (as Harry adorably sings “Heigh Ho” from Snow White and the Seven Dwarves)

There’s a lot of backyard romping, which is pretty adorable, to be honest. (We’re particularly big fans of watching Prince Harry on a Slip ‘n Slide because it feels like something you wouldn’t imagine from a Duke and royal prince...)

Is Archie following in the footsteps of family friend Elton John...?
Lilibet on the move!Netflix
Walking down the primrose path.Netflix
Lili among the flowers.Netflix
Zucchini muffins are always a good idea.Netflix
Definitely a carry on item...Netflix
A true California boy gathering oranges.Netflix
Let’s go fly a kite...!Netflix
Archie found this duck hysterical.Netflix
1/9

But this moment where Meghan shows her little one (we think Lilibet) a photo of “grandma” just absolutely melted our hearts and might be our favorite.

The children become more central to the narrative in the second batch of episodes (the first three mainly cover the couple’s childhoods, courtship, and engagement), and while they appeared more in the second half of the series, use of their images remained somewhat limited, for the most part. And, honestly, after seeing what Harry has had to go through his whole life and what Meghan has had to go through for her love of her partner, we couldn’t be happier to see them break a cycle of such entitled media frenzy for their little ones — that they’re able to share only what they choose to share.

This article was originally published on Dec. 8, 2022