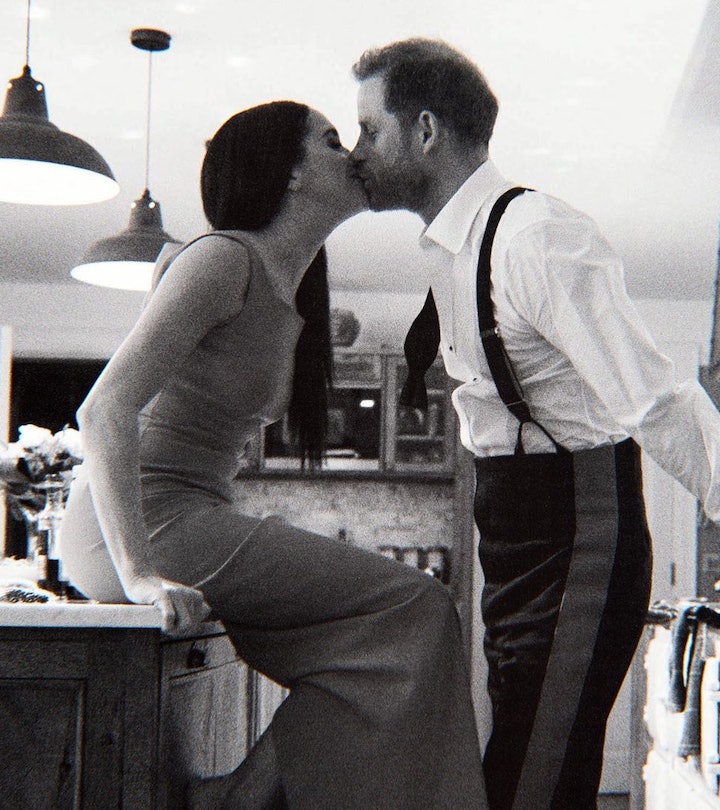 Their new documentary tells their story in their own words and photos.

We might feel like we know Prince Harry and Meghan Markle, the Duke and Duchess of Sussex. We followed their romance, fairy tale wedding, the births of their children, their tumultuous relationship with the press, the royal family, and, of course, their departure from public life in the UK. But aside from a bombshell interview with Oprah Winfrey, we don’t really know them do we? That’s why we’re so excited for the upcoming six-part Netflix docuseries Harry & Meghan because already, the teaser trailer has provided us with never-before-seen personal pictures of the couple and we can’t even.

While the series doesn’t have an official release date, some have speculated that “coming soon” could mean pretty soon indeed, with royals insider R.S. Locke suggesting Dec. 8. The series aims to share the duke and duchess’ story, from their own perspective and in their own words. A description from Netflix calls Harry & Meghan “never-before-seen look at one of the most-discussed couples in history.”

“Across six episodes, the series explores the clandestine days of their early courtship and the challenges that led to them feeling forced to step back from their full-time roles in the institution,” the statement reads. “With commentary from friends and family, most of whom have never spoken publicly before about what they witnessed, and historians who discuss the state of the British Commonwealth today and the royal family’s relationship with the press, the series does more than illuminate one couple’s love story, it paints a picture of our world and how we treat each other.”

The Meghan & Harry teaser trailer does, indeed, tease in the truest sense of the word: a slideshow of personal, black and white candid photos of the royal couple — from clearly private moments to playful selfies — play over sentimental music and the pair discussing why they wanted to share their story in this way. “When the stakes are this high,” Meghan concludes, “doesn’t it make more sense to hear our story from us?”

We didn’t know Harry played guitar. Meghan does, too. OMG do you think they play duets for the kids?!

The open car here looks like it could be on some sort of safari. Maybe a picture from their 2018 East African honeymoon? Or that time Harry took Meghan to Botswana on their third date? (The perks of being a prince, amiright?)

Apparently, royalty is not immune to the charms of the classic mid-jump picture. We love the idea of a glamorous actress and a posh prince giggling “OK, now a fun one!”

This photo from the couple’s wedding reception definitely has a more convivial, carefree vibe than their stately, very public marriage ceremony.

Are you even an adorable couple if you don’t have absolutely precious photobooth pictures of you kissing?

The couple’s dogs (they have three) make a few appearances in these personal photos of the Sussexes.

We don’t know yet if these are pictures from Meghan’s pregnancy with Archie or Lilibet, but we’re obsessed with the beautiful bump and perfect lighting.

Again, it’s the fact that some of these pictures are so incredibly ordinary that makes us happy.

You just know Harry snapped this one when she wasn’t looking and immediately declared “Ooh! That’s a good one, come look” and now it’s Meghan’s favorite picture of herself.

We genuinely can’t tell if the Duchess is laughing or crying in this shot. Given the rollercoaster of a personal life she’s had since joining the royal family it could easily be either. I guess we’ll just have to watch.

We’re dying to know the context for this shot. And also for all the other shots. Until then, we’re just going to have to tide ourselves over with imagining...