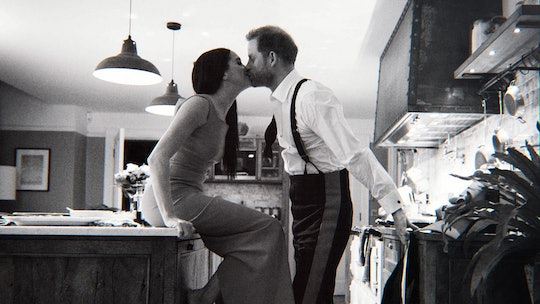 “No one sees what's happening behind closed doors.”

Royal watchers, hold onto your fascinator hats! Netflix just dropped the trailer for its highly anticipated docuseries Harry & Meghan, and boy does it look juicy. The six-episode “global event” is set to include never-before-seen pictures, interviews, and videos that should satisfy the curiosities of many fans (and detractors) of the Duke and Duchess of Sussex. Netflix categorizes the documentary as “investigative” and “intimate,” and we might even get to follow cameras as they take a peek inside the couple’s California home. Do Prince Harry and Meghan Markle wear matching monogrammed robes? How many chic jumpsuits will the duchess don? These are the burning questions that are still left unanswered. Until then, here’s what what we know so far about Harry & Meghan based on the bombshell trailer.

The Harry & Meghan trailers tease all the drama in store.

Shout out to the sound artists who amped up the drama with some amazing audio effects. The first teaser for the limited series opens up with some somber piano music and a compelling question for the Montecito-based couple: “Why did you want to make this documentary?”

As the dramatic music continues to plays in the background, intimate photos from Harry and Meghan’s travels and marriage flash across the screen. Several loud clicks of cameras follow. “No one sees what's happening behind closed doors,” Harry says. A glass is heard shattering and an image of a distraught Meghan appears with her face in her hands, followed up by a photo that might be the most interesting (and shadiest) of the trailer, where Kate Middleton is caught looking straight at the camera.

“I had to do everything I could to protect my family,” Harry continues.

The images flicker across the screen at warp speed now. There’s Meghan wiping tears in a limo, stacks of newspapers, mobs of paparazzi. A flurry of childhood photos of Harry and Meghan. And then Meghan gets the last word: “When the stakes are this high, doesn't it make more sense to hear our story from us?”

On Dec. 5, Netflix gave us another look at Harry & Meghan in the first official trailer. “It’s really hard to look back on it now and go, ‘What on earth happened?’” Harry says. Footage of the couple’s engagement, moments from early in their relationship, their royal wedding, and more then run across the screen as audio from news coverage plays in the background.

“There's a hierarchy of the family,” Harry continues. “You know, there's leaking, but there's also planting of stories ... It's a dirty game.”

Harry then refers to his late mother, Princess Diana. “The pain and suffering of women marrying into this institution, this feeding frenzy,” Harry says before Meghan adds, “I realized, they're never going to protect you.”

When is Harry & Meghan’s release date?

Harry & Meghan will be available to watch on Netflix on Dec. 8, but there will be two release dates. Episodes 1-3 will premiere on Dec. 8 and Episodes 4-6 will premiere a week later on Dec. 15.

Harry & Meghan will feature a plethora of cute couple photos.

If there’s one thing the trailer solidified — there will be no shortage of cute couple photos in the Netflix documentary. So whether you love them or hate them, can’t live with them or without them, photographic evidence from the teaser confirms that Harry and his soulmate are apparently still really, really into each other.

The timing of the trailer’s release is interesting.

While it might just be a coincidence, some are side-eying the suspicious timing of the release of the trailer when Prince William and Kate Middleton just so happen to be visiting the United States. The royal couple is currently hitting up Boston, where they’ve already sat courtside at a Celtics game. But who knows, maybe the trailer will inspire a change of heart, and the Prince and Princess of Wales will take an unplanned flight to the west coast and drop in for some Montecito tea with Harry and Meghan.

This article was originally published on Dec. 1, 2022