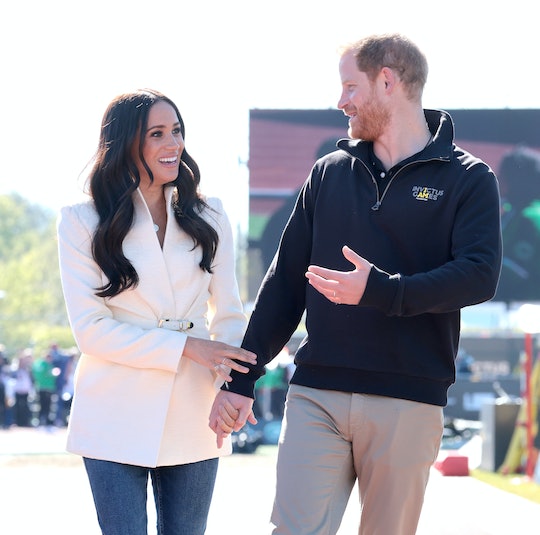 Netflix could soon release a new “at-home with the Duke and Duchess of Sussex-style” docuseries.

The time has finally come. After months of speculation about their famed multimillion dollar Netflix deal, reports have surfaced that the Duke and Duchess of Sussex are going to release a docuseries and it could give fans a deeply intimate look at their life since leaving their roles as senior royals. So money well spent, Netflix.

Page Six shared details of a new Netflix docuseries that will follow Prince Harry and Meghan Markle in their new lives as private citizens. While Netflix has not yet confirmed the deal, the timing certainly makes sense as the couple signed a multimillion dollar deal with Netflix in September 2020 that would include “documentaries, feature films, scripted television shows, and children's’ series.” Since then, Meghan produced an animated children's’ series called Pearl that has since been dropped by the streaming service.

Now the couple are making good with a new “at-home with the Duke and Duchess of Sussex-style” docuseries, per Page Six. Netflix filmed Harry and Meghan as they traveled to The Hague in the Netherlands for the Invictus Games for a new series called Heart of Invictus, which was produced with the couple’s Archewell Foundation. But this new docuseries might offer a much more personal look at their lives than that.

Harry and Meghan’s new docuseries is expected to share behind-the-scenes looks at two of their recent trips, one to The Hague and the other to New York City in the fall of 2021. Whether or not the Netflix crew captured footage of the couple visiting Queen Elizabeth on their way to The Hague in April is still up in the air, but seems fairly unlikely.

What is expected, however, is that the docuseries will feature moments with the couple at their home in Montecito, California, according to Page Six. This is not unprecedented for them, of course. They shared some private moments on the beach and at 3-year-old son Archie’s “Chick-Inn” during their March 2021 interview with Oprah Winfrey, but this docuseries could see them getting a bit more in-depth. Seeing the Sussexes at home and living their new life, as it were, in a way they can control on some level.

They’ve done a docuseries before.

Back in October 2019, the Duke and Duchess of Sussex filmed their ITV docuseries Harry and Meghan: An African Journey which, in many ways, proved to be a harbinger of change to come. Meghan, who was a new mom to baby boy Archie at the time, admitted she found all of the tabloid assaults “hard” and told host Tom Bradby, “it’s not enough to just survive something, that’s not the point of life. You’ve got to thrive.” This new docuseries in her home with her husband and her son and her 11-month-old baby girl Lilibet will hopefully see them all thriving.

The docuseries doesn’t have a release date yet.

No word yet from Netflix, but a producer close to the project told Page Six that the streaming service hopes to premiere the series at the end of 2022, around the same time as Prince Harry’s memoir is meant to be published. Which means we could even see Harry and Meghan taking their two children back to the UK for Queen Elizabeth’s Platinum Jubilee in June. What a dream that would be.

More Like This
Meghan Markle Proves Once Again She's Totally Going To Be A Snack Mom
Meghan Markle Calls On Men "To Be Vocal" In The Aftermath Of Roe v. Wade Ending
Princess Charlotte Got So Excited To Shake A Royal Fan's Hand
Prince George Hosted A “Little Cake Sale” For One Of His Dad's Favorite Charities