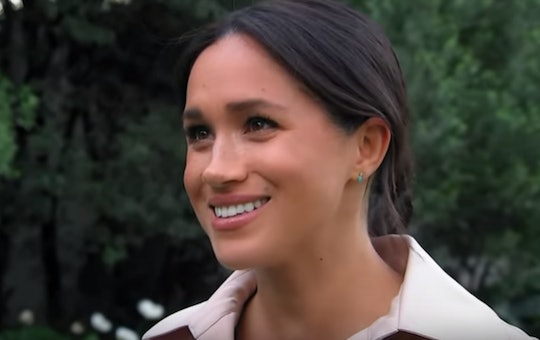 Meghan Markle and Prince Harry shocked the world on Wednesday when they announced that they plan to take a "step back" from their senior roles in the royal family to become more independent. It was a decision that was ironically met with criticism from the British tabloids who arguably pushed them towards it. And to be honest, it should not come as much of a surprise to people who watched the couple's emotional documentary filmed in Africa. Months ago, Markle made a comment that may have foreshadowed her and Prince Harry's decision to break away from the royal spotlight, and perhaps her critics should have paid closer attention to just how difficult life had become for them.

The Duke and Duchess of Sussex shared the news of their plans with a detailed message on Instagram on Jan. 8, writing that they hoped to become more "financially independent" while continuing to support Queen Elizabeth. They also noted that they "now plan to balance our time between the United Kingdom and North America, continuing to honor our duty to The Queen, the Commonwealth, and our patronages," which has some thinking that they could move to Canada with their son Archie as the country remains part of the Commonwealth.

While everyone is professing shock, Markle actually alluded to some plans, or at least a desire, for a change in her life in her interview with ITV's Tom Bradby for the documentary Harry and Meghan: An African Journey in October.

At the time of the documentary, Markle and Prince Harry had both launched separate lawsuits at two different British tabloids for defamation and invasion of privacy issues. They were struggling with an almost constant barrage of attacks from the press in the United Kingdom, something Markle admitted to Bradby took her by surprise because she simply "had no idea" it would be so bad.

Markle also told Bradby that she had been trying to adopt the whole "stiff upper lip" attitude of the British people, but worried about what it might do to a person internally. Perhaps most importantly — as various media outlets have pinpointed, including TODAY and NBC News — Markle gave a glimpse into her plans for the future when she said:

It's not enough to just survive something, right? That's not the point of life. You've got to thrive, you've got to feel happy.

Whether critics of the Duke and Duchess of Sussex like it or not, their decision to move towards a life of their own making could be exactly the kind of life Markle was talking about. A life where she can thrive with her husband and baby boy. Where they can work together on their charitable organizations and find some peace. Perhaps their six weeks on the west coast of Canada, where they were seen hiking in the woods and going for quiet family walks, gave them a sense of the sort of life they hope to lead.

Buckingham Palace, the office of Queen Elizabeth, released a statement immediately after the announcement noting that they "understand" Markle and Prince Harry's desire to start a new life, but these things "take time." So perhaps they won't be making changes in the immediate future. Whenever they do, though, I truly cannot wait to see what happens next.