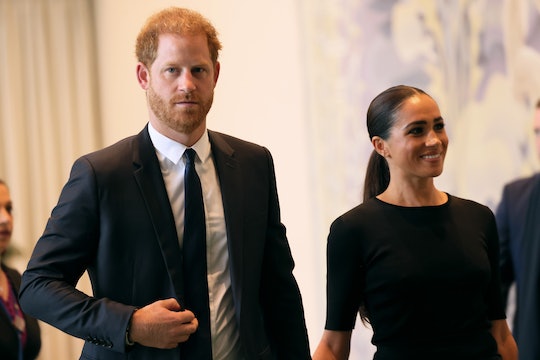 The lucky beagle will be living it up in Santa Barbara.

Momma Mia was rescued from a testing facility that housed over 4,000 beagles and bred dogs for medical research. She and her eight puppies were saved by the Beagle Freedom Project, from which Markle and Prince Harry adopted the lucky dog.

The Duke and Duchess of Sussex not only saved the 7-year-old mistreated animal from the breeding facility in Virginia, they also deserve kudos for being committed to an older dog. "They made a point to adopt a rescue named Mia, who most would overlook because she is older, has health issues and is traumatized by her past,” said animal rights attorney Shannon Keith, who is president and founder of the Beagle Freedom Project.

"I was so impressed by their commitment to animal welfare! They have been following up letting us know how well Momma Mia is doing in her new, amazing home!" she continued.

For the royal couple it was apparently canine love at first site. “The second they walked in, it’s like Momma Mia knew,” Keith told The New York Times. “She ran over to them. Her tail was wagging a million miles a minute.”

Markle was reportedly down-to-earth and laid back about the adoption process too. In a pretty funny mix-up with another famous celeb mom, Keith was at first confused by who she was talking to on the telephone when the Duchess of Sussex casually called up the Beagle Freedom Project and introduced herself by her first name only. “We talked for 30 minutes, and I thought, ‘Is this Megan Fox?’” said Keith.

The Duchess of Sussex is a known animal lover. She’s already a dog mom to two rescue dogs — a beagle named Guy and Black Labrador named Pula. Markle’s son Archie, 3, apparently has a very sweet bond with his mama’s pups too. The Archetypes podcast host also used to have an older mixed breed named Bogart, who she left behind in Canada after she married Prince Harry.

While it’s heartwarming when any dog is rescued, being adopted by Meghan and Harry is definitely hitting the doggy jackpot. Guy has already cruised in style with The Queen, inked a book deal, and is basically living his best doggy life.

Here’s to Momma Mia living out her canine dreams in California too.