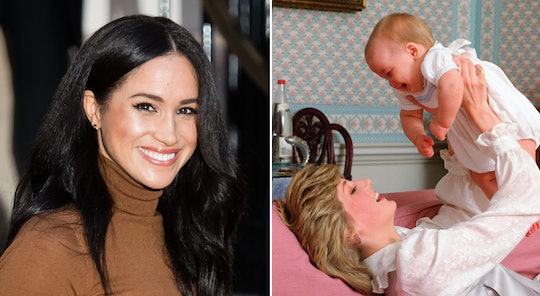 It’s the pose of a loving mom.

When Meghan Markle and Prince Harry decided to share their very first photo of daughter Lilibet “Lili” Diana with the world, they did it on their own terms. The couple wore jeans, along with 2-year-old son Archie, and made the photo about their love for each other as a family. Much as Prince Harry’s own mother Princess Diana always tried to keep things focused on her children. Which is why Meghan’s pose with Lilibet in their first Christmas card as a family of four was so especially poignant. It looked just like a photo of Princess Diana smiling up at her own baby boy decades earlier. The pose of a mother who loves her baby.

The Duke and Duchess of Sussex spent Christmas together with their children at their Montecito, California home, thousands of miles away from England, where Prince Harry was raised by his mother. But that doesn’t mean she’s ever far from his mind. Or Meghan’s mind, if her sweet photo with her family, taken by Alexi Lubomirski, is any indication. The photo sees Meghan lifting baby Lili above her head and smiling up at her with her head thrown back. Lili, wearing a sweet little pink dress, smiles down at her mom.

Just like Princess Diana once smiled up at her first born son, Prince William, back in February of 1983.

Princess Diana was posing at Kensington Palace with her 7-month-old son Prince William in the photo, relaxing back on the couch as she swung him above her head and made him laugh. At the time, it was a very different look for a royal mom to be so casual with her child in front of the camera. And a real indication of exactly the kind of loving, hands-on mother Princess Diana would become to both her sons before tragically dying in a car accident in 1997.

The same seems to hold true for Meghan Markle. “The body language that Meghan uses with her baby here is an almost direct and perfect copy of a pose adopted by Diana with her own baby many years before,” body language expert Judi James told the Daily Express. “Both women define themselves as loving, doting mothers with this pose and both allow their babies to be seen in a playful mood as they laugh and smile down at them.”

Princess Diana’s influence over her sons and their families continues to resonate to this day, especially in the way they parent. They couldn’t really ask for a better role model if they tried.