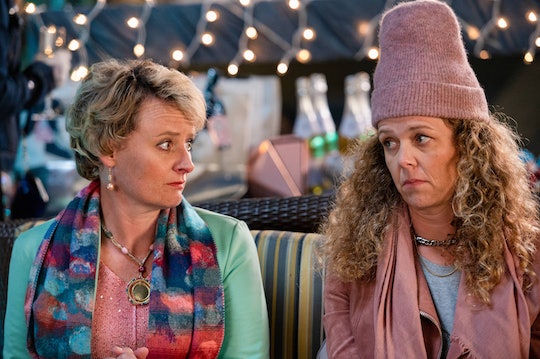 Workin' Mom Friends: How A Show About Motherhood Got Me Thinking About Friendship

We’ve never valued friendship less as a society, but the women of Workin’ Moms show us another way, albeit a fictionalized Canadian one.

Whether it's dealing with breastfeeding, school admissions, or a frustrating spouse, sometimes, it feels like my mom friends are all that gets me through. The Netflix show Workin' Moms has always centered these friendships, revealing the joy but also the conflict in them, and that's part of why I love it.

In a recent survey, just 13% of Americans said they had 10 or more close friends, down from 33% 30 years ago. The number of people who identified as "having no friends" has quadrupled in that same time, from 3% to 12%. We’ve never valued friendship less as a society.

The women of Workin’ Moms present another model, although a fictionalized Canadian one. In the show, friendship is paramount but not easy. Kate, Anne, and co. put in work on their relationships with each other. I appreciate learning from their hilarious and often over-the-top struggle. Season 5 doubles down on this theme with the main conflict being how Catherine Reitman’s Kate and the other moms prioritize each other.

Take the opening episode: Anne’s left the city, and, in a series of quick cuts, she gets through the pandemic lockdown, then starts making some new mom friends. But these women aren’t like the ones back home. It’s not just that they wear gaudy charm bracelets and rhinestone-studded jeans, they also don’t have the long history and shared values that Anne has with her friends back home. So when things get messy, they don’t extend each other grace. Instead, sh*t goes nuclear.

I don’t read this friends-to-foes plot as a warning that you can’t make new connections as a grown-up (after all, didn't the group incorporate Val in all her wackiness?). Instead, I saw it as a note that our friends aren’t replaceable. Anne chose her nuclear family over her community, like so many of us do. But her isolation only mounts and eventually she escapes (some might say flees) to Toronto.

In the end (spoiler coming!), she gets her happy ending when her husband and kids follow and decide to move back to the city. But how many of us can do that? And what do we lose in the process? Clearly friendships matter, but as the show captures, they are so hard to prioritize.

Kate has a different conflict in front of her — not friends vs. family, but friends vs. work. All the women on Workin’ Moms are complicated but Kate’s ambition, and the selfishness that comes with it, has always been most interesting to me (maybe I relate too much?). We’re talking about a woman who takes a promotion that separates her from her newborn, who takes on a men’s rights group as a client. Those particular choices backfire but how much Kate learns from them is unclear.

In this season, Kate’s work life doesn’t threaten her marriage or bond with her kids. This time it interferes with her friendships. In a moment of desperation, she uses an idea from the artwork of Rhoda, Frankie and Giselle’s daughter. But then her new client, the media mogul Sloane, runs with the art, clearly impeding on the little girl’s intellectual property. When she finds out, Frankie feels betrayed and Kate doesn’t know what to do. She chose work over friendship and she doesn’t know how to make it right without compromising her new client and all the power that came with having landed that big account. Luckily for Kate, this particular issue works itself out naturally (perhaps all art is derivative?) but Kate and Anne’s struggles aren’t so easily resolved.

I’m thankful for shows like Workin’ Moms, especially Season 5, that examine the difficulties our friendships face, and what prioritizing them really looks like.

It starts after Kate passes Sloane Anne’s unpublished manuscript. Sloane decides to take it and Kate begins working on the publicity. But what’s best for book sales isn’t perhaps best for Anne — whether it’s determining the book cover, outing Anne’s abortion on national television, or generally relying on her temper to stir controversy. Kate sometimes pushes back on Sloane and sometimes on Anne, stuck not just between the two but in the unenviable position of having to decide what’s best for Anne without Anne.

Talking to her husband, Kate recalls that Sloane said, “I can't have my feet in two different boats” in a “friends-versus-business analogy.” But he rightly notes, “Even if you wanted to, you couldn't stick to one boat. Your heart and your business are interconnected. But why do the boats have to go in different directions? Just keep 'em side by side, like water skis.” Kate tries but the particular feat, despite Kate’s “very strong thighs,” may not be possible. If she has to, what will she choose? What would I choose? What would you?

Meanwhile, Jenny still gets a plot, although since she’s not part of the friend group, her place in the show isn’t exactly clear. She does use her (work) friend to help her learn to accept the bisexuality of her new partner but that doesn’t exactly fit within the season’s larger themes. Instead, I think we still have Jenny because of Jessalyn Wanlim’s phenomenal comedic timing and as a reminder that (middle-class+) working motherhood is not the sole domain of white women.

Furthering that idea, Season 5 also features some great interactions between Kate and Aiza Ntibarikure’s Maya, a Black mom whose son goes to school with Kate’s kid. The two boys have some play date adventures, forcing the moms to stop drinking wine and address their cultural differences. I hope the show leans into that aspect, giving Maya a life outside of being Kate’s occasional mom friend in Season 6 (yes, we’ve got another season coming!). Because friendships keep us honest and it’s time we value them more. Whether they’re the time-tested version like Anne and Kate, or newer friends like Kate and Maya.

Who among us didn’t sing “make new friends, but keep the old; one is silver but the other is gold” growing up? And yet the lesson is easily lost in a society that expects our spouses to be our best (and too often, only) friend. We need to shift that paradigm and admit that platonic friendships are important to our well-being, too. We should value them more. I’m thankful for shows like Workin’ Moms, especially Season 5, that examine the difficulties our friendships face, and what prioritizing them really looks like.