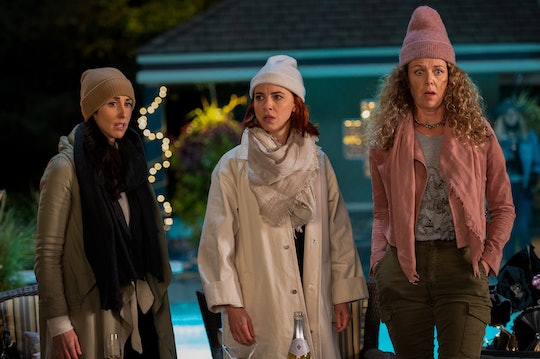 Get ready for a whole new season of the hilarious, and all too relatable, realities of juggling a career and a love life all while trying to raise kids.

The wait is finally over — almost! Season 5 of Workin’ Moms is scheduled to drop on Netflix this summer, more than a year after the sitcom’s fourth season was added to the streaming platform. And although fans still have a few more weeks to wait before they can find out what hilarious hijinks these four working moms have gotten into, the latest season is guaranteed to be the perfect tonic for a long day wrangling kids.

For those who haven’t seen Workin’ Moms, the Canadian series presents a hilarious, and often all-too-relatable look at modern-day motherhood. It follows four very different women who have become bonded together thanks to their roles as moms and a rather bizarre Mommy and Me class.

While Workin’ Moms airs in Canada on CBC, viewers in the United States will find Seasons 1 through 4 of the series on Netflix. Netflix will also host the show’s fifth season.

Mark your calendars, Season 5 of Workin’ Moms hits Netflix on June 15. Whether you’re planning on savoring one episode a night or consuming the sitcom’s latest season all in one weekend, the on-demand nature of streaming via Netflix has you covered.

Where We Left Off

Warning: Spoilers from Season 4 are ahead! Season 4 saw Kate reunite with Nathan, the husband she’d separated from in Season 3 following his affair with the nanny. And it wasn’t long after that a financial issue forced Nathan’s parents to move in with the newly reunited family. Throughout the season Kate struggles to keep clients at her PR firm happy and her intern, who just happens to be Anne’s daughter, out of trouble.

In an effort to keep Alice from getting into trouble, Anne loads her up with a jam-packed schedule that includes an internship and music lessons. But she soon discovers her tough approach to parenting isn’t working, which makes her question a book deal she recently accepted on the topic. When Anne’s husband accepts a job in another city, Anne wonders how a move might affect her friendship with Kate.

After tracking down the sperm donor Bianca used — and thwarting his attempt to steal the money Bianca had put aside for a college fund — Season 4 ended with Frankie agreeing to become an adoptive co-parent to Bianca’s baby. Meanwhile, Jenny advocated for herself and her fellow working moms at the office. After discovering women are making less than their male counterparts, she ignites a fight for equal pay among her coworkers and snags a date with the office mediator in the process.

Catch Season 5 of Workin’ Moms on Netflix on June 15 to see what’s next for Kate, Anne, Frankie, and Jenny.