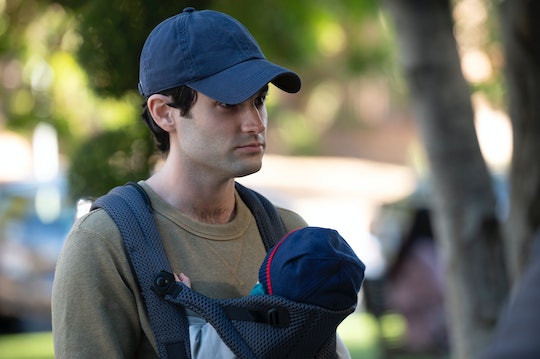 “Welcome Baby Henry”: Joe Is A New Dad In Season 3 Of Netflix’s You

Hello, You... Netflix’s creepy thriller You is officially returning for Season 3 this fall and Joe Goldberg is, wait for it, a dad. Yup, it looks like the new season is going to be full of twists, turns, and a little baby named Henry.

Joe, played by Penn Badgley, relocated to Los Angeles in Season 2 of Netflix’s You. It was there where he met chef Love Quinn, played by Victoria Pedretti, the woman of his dreams who has a dark side to her, just like him. While Joe, who’s a straight up murderer and stalker, contemplates killing Love after discovering her secret at the end of Season 2 — spoiler alert — she reveals that she is pregnant with his child and they move into a quiet suburban home.

But fans of the show, or the book series by Caroline Kepnes that the Netflix show is based off of, know that things aren’t always what they seem. And you’ll have to see for yourself what happens in the new season.

You Season 3 Premieres In October

The new season will premiere on Friday, Oct. 15. In a teaser trailer for the new season, Badgley, as Joe, discusses his feelings about being a new dad. “A boy is not what we expected and I would be lying if I said said the thought of mini me was surely exciting and not without challenges,” Joe says in the voiceover, as he reveals a cake that shows his new arrival’s name, Henry.

The official full length trailer gives a glimpse at Joe’s new life as a dad and it’s safe to say that he isn’t exactly thrilled about parenthood. “In my history of scared, this is the most scared that I have ever been,” he says in a voiceover in the trailer as his son is being born.

The trailer shows Joe and Love starting new in the suburbs, with Love working at a cupcake shop and mingling with the moms who love gossiping over lattes. “We’re just the nice, normal neighbors next door,” Joe tells Love in the trailer. “We are a team.” But as viewers know with Joe, old habits die hard.

Joe can be seen following around his next door neighbor while Love, who is very suspicious of his actions, suggests they go to couples therapy. “You are many things, but you are not murderers,” their therapist tells the couple, before the trailer shows them digging a grave while their baby boy looks on. Oh little does she know.

You Season 3 Will Focus On Joe’s New Life

At the start of Season 3, Joe and Love are now married and raising their son after moving to a suburb in Northern California, where they are surrounded by “privileged tech entrepreneurs, judgmental mommy bloggers, and Insta-famous biohackers,” according to Entertainment Tonight.

While Joe is committed to his new role as a devoted husband and father, he also fears his wife’s impulsiveness, and can’t resist his old ways when he falls for his neighbor next door. Juicy!

You Season 3 Will Have *Many* New Characters

Of course, Badgley will reprise his role as Joe Goldberg. You can also expect Pedretti to play his partner in crime and mother to his new child, Love Quinn, and Saffron Burrows will return as Love’s mother, Dottie.

There will also be some new faces that pop up in this new season. Here is who you can expect to see play a pivotal role in Joe’s new life as a dad, according to Deadline:

You can also expect to see the return of Young Joe in flashbacks throughout the season, according to Deadline.

But what else would you expect from Joe? You show runner and co-creator, Sera Gamble, told The Hollywood Reporter that this new season will explore Joe living in a suburban world as “a fish out of water.” While Gamble remained mum on the details surrounding the story of Season 3, she did say that “things won’t go well for Joe” which can mean a number of things. So it’s very likely that this new dad won’t have his happy ending.

You Seasons 1 & 2 Are Streaming On Netflix

While you wait for the new season to premiere, you can revisit the first two seasons of the super thrilling show, which are streaming on Netflix right now.

This article was originally published on Aug. 30, 2021