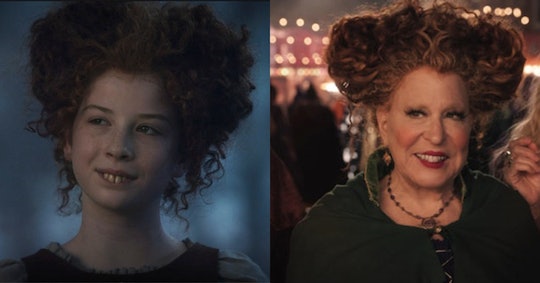 “Bigger is always better with her.”

Filling the pointy-toed shoes of one Winifred Sanderson is not a feat for the faint of heart. Especially for someone who has been watching Bette Midler in her iconic role in the 1993 version of Hocus Pocus for years like Taylor Paige Henderson. So when she took on the role of young Winifred Sanderson for Hocus Pocus 2, Henderson really got to work studying every one of Midler’s moves. And fortunately, she was lucky enough to get some solid advice from Winifred Sanderson herself.

Henderson sat down for an interview on TODAY to discuss her role in the sequel to Hocus Pocus, a movie she said she had watched “every Halloween for as long as I can remember.” She ended up watching the movie about 40 more times for research purposes in an effort to really nail all of Midler’s mannerisms when playing Winifred Sanderson.

“When you watch the [first] movie, that’s something that you notice about Winifred — that weird thing she’s doing with her hands with her fingers by her face. I thought it was really important to add that in because obviously she does it a lot,” Henderson told TODAY. “Winnie is always moving. She’s everywhere all the time. She’s up in everyone’s business. She loves her sisters so much. So, I really focused on that because I think that was really important.”

Considering Henderson was tasked with setting the mood of the movie by dominating the opening scene, storming through the village of Salem and throwing a temper tantrum, it’s a good thing she took things seriously. And that she had Bette Midler herself in her corner, giving her advice on playing the character they now share. “Bette said to embody the character more than I think is necessary. Bigger is always better with her,” Henderson told TODAY. “She said to use what Winifred has to be the character — the hair, the hands, the teeth. Oh my God! When I put the teeth in for the first time that helped me so much to become her better.”

The advice clearly worked, as Henderson has been getting praised all over the place for her spot-on performance as young Winnie Sanderson. Sassy, temperamental, wild, but ultimately loving her sisters more than anything else in the world. Even as she bullies them. How lucky are we to have two talented Winifred Sandersons on film?