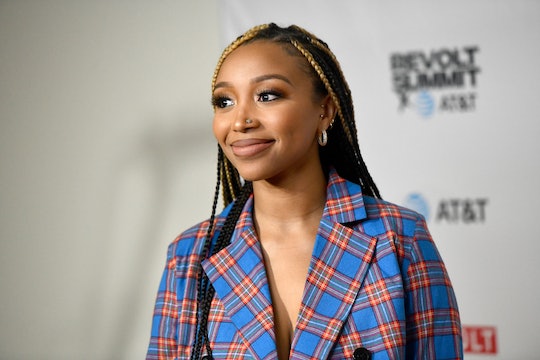 Tameka "Tiny" Harris' "luvbug" now has a "luvbug" of her own now.

The Harris-Pullins gang has just grown by one. Television personality and music artist, Zonnique Pullins has given birth to a baby girl. The 24-year-old new mom and her rapper boyfriend, Israel "Bandhunta Izzy" James, welcomed their newborn daughter earlier this week on Dec. 15.

Pullins' mother, singer-songwriter Tameka “Tiny” Harris, was one of the first people to break the happy news. "My Gbaby is so fat & cute!!" the proud grandma wrote on Instagram, referring to her first grandchild. "Just as I dreamed she would be." In her post, she also shared a belly picture from her daughter's gorgeous maternity shoot with People earlier this year.

Romeo Miller, Pullins' co-host of The Mix on Fox Soul, also announced the exciting baby news to their virtual audience on Tuesday. According to Miller, Pullins' daughter was born at 6:27 a.m at 8 lbs 8 oz, and 21 inches long. "We haven’t seen her yet, but we already know she’s a beautiful, amazing strong princess," Miller said in an IGTV video about the newborn.

Pullins, who is also the stepdaughter of ATL rapper T.I., officially announced her pregnancy with James back in August. "Literally every year, probably for the past three years, this same rumor [that I was pregnant] had come out," Pullins told People at the time. "This time I actually am pregnant. It's weird!

In an October interview with Entertainment Tonight, Pullins shared that her initial reaction to her pregnancy was a bit blue. "At first I was definitely sad," she told the outlet, adding, "but I feel like it was definitely God 's plan for me."

Ahead of her baby girl's arrival, Pullins told People she's looking forward to teaching her little girl and learning from her as well. "I'm honestly just looking forward to always having a partner and something that I can literally say I made that I'll always be proud of and be able to grow with," she told the magazine in December. "And the lessons I'll get to teach and learn all at the same time is a really exciting feeling for me."