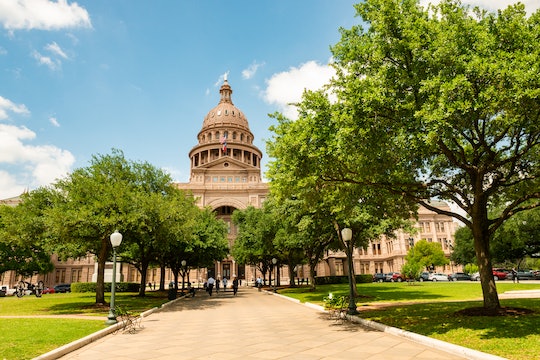 The committee convened in the Texas senate on Monday to consider a new bill that would make it possible to charge parents with child abuse if they support their transgender child’s gender-affirming surgery. The new bill could see parents punished with potential jail time, and could sent a dangerous precedent if passed. Which is why this 10-year-old’s testimony against the Texas anti-trans bill is not just courageous but incredibly important. As a trans girl, Kai Shappley shouldn’t have had to spend her “free time asking adults to make good choices,” she explained, but she understood that it was necessary.

If passed, Texas Bill 1646 would change the definition of child abuse by including the approval, consent, or administration of hormone replacement therapy, surgical or medical procedures “for the purpose of gender transitioning or gender reassignment” to anyone under the age of 18 years old in the state.

When the Texas Senate Committee on State Affairs convened on Monday to consider this proposed legislation, Kai Shappley testified in front of them. Reading from an iPad in a video shared by the ACLU on Instagram, she shared some of her interests including “ballet, math” and spending time with her cats, chickens, and FaceTiming with her friends. She does not, however, like having to explain herself, something she has been doing since she was very little. “Texas legislators have been attacking me since I was Pre-K,” she went on to explain, “I’m in fourth grade now. When it comes to bills that target trans youth, I immediately feel angry. It’s been very scary and overwhelming.”

The 10-year-old trans girl, who appeared in the 2020 TV series The Babysitters Club, feels “sad” that “politicians use trans kids like me to get votes from people who hate me just because I exist. God made me. God loves me for who I am and God does not make mistakes.” She also spoke out in defense of her mom, who would be affected if the Republican bill was passed as it would criminalize her support of her trans daughter. “You are now targeting a great mom and a great nurse.” She noted that her mother needed her nursing license to take care of her children.

Kai and her mom Kimberly Shappley, who live in Pearland, Texas, have been advocating for trans rights for years. In 2018 Kai was pulled out of school after struggling with her classmates. “We've just been having trouble with other students telling her she can't line up with girls because she's a boy. It's not the kids' fault, they don't understand," Shappley told the Houston Chronicle. "And Pearland ISD doesn't want to educate them. It became too much."

The 10-year-old advocate ended her testimony by telling the Texas senate, “Bullying is bad. Please stop. Don’t make bad choices. It’s never too late to turn it around.”

Wise words from a 10-year-old girl who shouldn’t have had to say them in the first place.