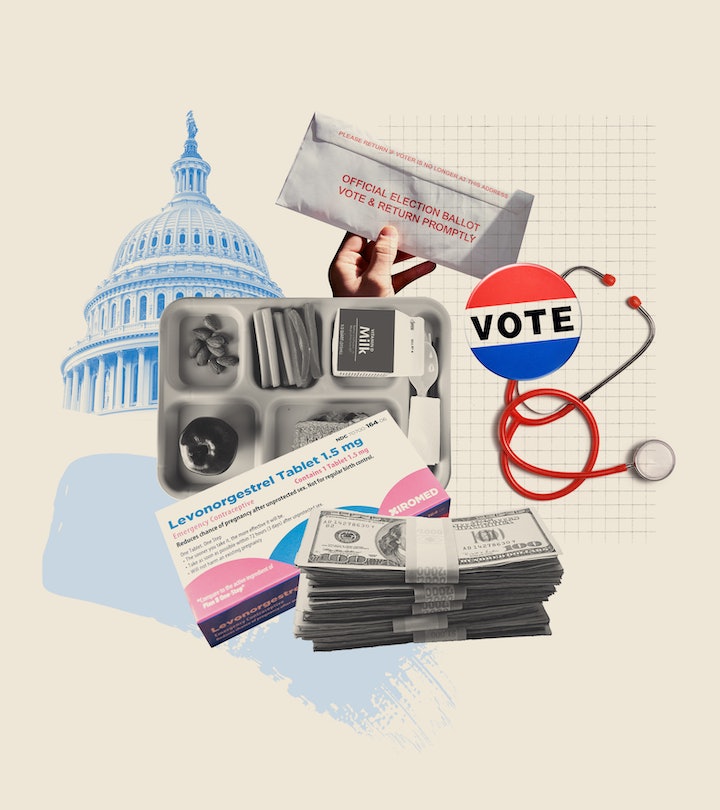 While midterms often focus on national politics, down ballot initiatives have the power to help — or harm — American families.

When it comes to midterm elections, the focus is generally on national consequences. Which party is in control of which branch of government? Which candidates beat the odds or performed worse than anticipated? What does this mean for the presidential election in two years? But important things are always happening at state and local levels — issues that can make a huge difference in the lives of families. We’ve rounded up 2022 midterm ballot measures that will benefit families across the country.

Many states grew accustomed to universal free lunch, temporarily supported by federal and (subsequently, in some cases) state governments, during the Covid-19 pandemic. Colorado has decided to keep this going in perpetuity via Proposition FF. The cost of the program will be funded by reducing income tax deduction amounts for those earning $300,000 or more — from $30,000 for single filers and $60,000 for joint filers to $12,000 for single filers and $16,000 for joint filers — and allocating that revenue to fund the “Healthy School Meals for All Program.” This initiative, which handily passed with 55% of the vote, will reimburse participating schools to enable them to provide free meals to students, regardless of their family’s income.

New Mexico has made Pre-K a right.

The benefits of pre-K programs in the ongoing success of a child’s education have been proven again and again, and while some cities have established universal pre-K programs for some of their smallest citizens, New Mexico is the first state to do so with the passage of Question 3. The ballot measure draws from the state’s Land Grant Permanent Fund, established 110 years ago and financed by state oil and gas revenue and interest on the fund’s investments. According to reporting from Vox, it is currently valued at approximately $26 billion and already supports education initiatives in the state.

Question 3, which passed resoundingly with 61% of the vote, increases that contribution for an additional $150 million for early childhood education, including universal pre-K. Education activists hope that this measure will reinvigorate the national discussion on funding universal pre-K throughout the country.

The idea of a $15 minimum wage — also known as the Fight for $15 — began more than a decade ago. In that time, many states have taken up the issue of a living wage (though most neglect to account for the fact that $15 per hour was considered a living wage a decade ago) and while none have reached the $15 goal (Washington comes closest with $14.49 an hour) on Tuesday, both Nebraska and Nevada voted to bump pay for low-wage workers. In Nebraska, where the minimum wage is currently $9 an hour, employees will see that go up to $15 by 2026, and then adjust thereafter to be commensurate with cost of living increases. Nevada (currently at $9.50) will be reach $12 an hour by 2024. According to the Center for American Progress, raising the minimum wage will elevate millions of children out of poverty, particularly children of color.

This general statement has panned out in two very different ways, but both, we think, will ultimately benefit families. In Arizona, Proposition 209 sets a limit on interest rates for medical debt and increased the value of property and earnings exempt from seizure or forced sale (aka, debt collectors cannot take your house, car, or garnish all your wages). The American Journal of Public Health a staggering two-thirds of bankruptcies in the United States are due to medical debt, so this is a huge win for many American families.

In South Dakota, Amendment D expanded Medicaid coverage to adults between 18 and 65 with incomes below 138% of the federal poverty level — about $38,300 for a family of four — beginning July 1 next year. While children have been able to receive healthcare through Children’s Health Insurance Program (CHIP), their similarly needy parents or siblings over the age of 18 have been left out of the equation and, as we all know, healthy parents mean healthier families.

California is a creative center of not just the United States but the entire world, and now the state has committed to nurturing that creativity from kindergarten through high school. Proposition 28 requires an annual source of funding for arts and music education in public schools. (The exact math of “how much” is dependent upon state and local revenues, and there are requirements regarding how the money must be spent, chiefly on educators.) Special consideration will be given to economically disadvantaged students. Studies have shown that access to arts education can bolster children’s academic achievement and overall school success, reduce stress, improve focus, and help develop stronger social-emotional and interpersonal skills.

States protecting abortion rights did far better than those attempting to limit access.

Abortion is a family issue. Not only as a matter of deciding whether to become a parent, but of true family planning: data show that 59% of people who get abortions already have at least one child at home. According to data from Ballotpedia, 2022 saw more abortion-related ballot measures than any other year on record, and the response was resoundingly consistent. All measures to protect abortion access passed. California’s Proposition 1, Michigan’s Proposition 3, and Vermont’s Proposition 5 have all enshrined the right to abortion and reproductive autonomy into their state Constitutions.

On the other hand, states that sought to limit abortion access or specifically deny a constitutional right to abortion universally failed in their aim. Kansas’ “No State Constitutional Right To Abortion and Legislative Power to Regulate Abortion Amendment” (which is exactly what it sounds like) failed a resounding 59% to 41%. Kentucky and Montana attempted similar ballot measures to limit abortion access or penalize abortion providers — Amendment 2 and LR-131 — have either failed outright or are on the verge of failing as of press time. (With 90% of the votes counted, LR-131 is more than 22,000 votes away from passing.)

The results of other ballot measures that could benefit families (Arizona’s Proposition 308, for example, which would allow undocumented Arizonans to qualify for in-state college tuition and financial aid) are still being tallied, so this is far from a comprehensive list. Nevertheless, it’s a good start.