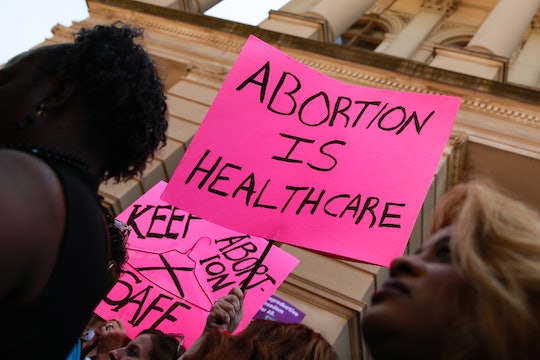 6 Types Of Abortions, According To An Abortion Provider

With recent laws restricting and expanding access to abortion care across the country, the word "abortion" comes across my social media and news feeds multiple times a day. Unfortunately, there's also a slew of misinformation out there about abortion, and more specifically, the types of abortions available to people. As a result, it can be pretty difficult to separate fact from fiction, medicine from politics, and obtain information, support, and the funds to access the care you want or need.

To find out more about the different abortion care options, and clear up some prevailing and common myths, Romper spoke to Dr. Diane Horvath, M.D., a Baltimore-based OB-GYN, abortion provider, fellow at Physicians for Reproductive Health, and medical director at Whole Woman’s Health. According to Horvath, there are a number of types of legal abortion procedures available to people who want or need them, depending on where a person lives, how far along in in their pregnancy they are, and their specific medical history.

Abortion is an incredibly common medical procedure — a reported one in four women will have an abortion before they're 45, according to the Guttmacher Institute. And the majority of Americans support access to abortion in all or most cases — 60% of Americans now say that abortion should be legal in all or most cases, a 24-year high, according to an ABC News/Washington Post poll. Still, because this form of reproductive health care has been highly-politicized, it can be difficult for people to obtain facts-based, judgement-free information about their medical options. But learning about the different types of abortion from an abortion provider on the front lines of abortion care can help you make an informed decision about your health care if and/or when you ever need or want to end a pregnancy:

More Like This
Chrissy Teigen Says She’s Come To Understand She Had An Abortion To Save Her Life
Here's How To Keep Your C-Section Incision Dry
New Report Shows 80% Of Pregnancy-Related Deaths Are Preventable
What Does Amniotic Fluid Smell Like? A Nurse Explains