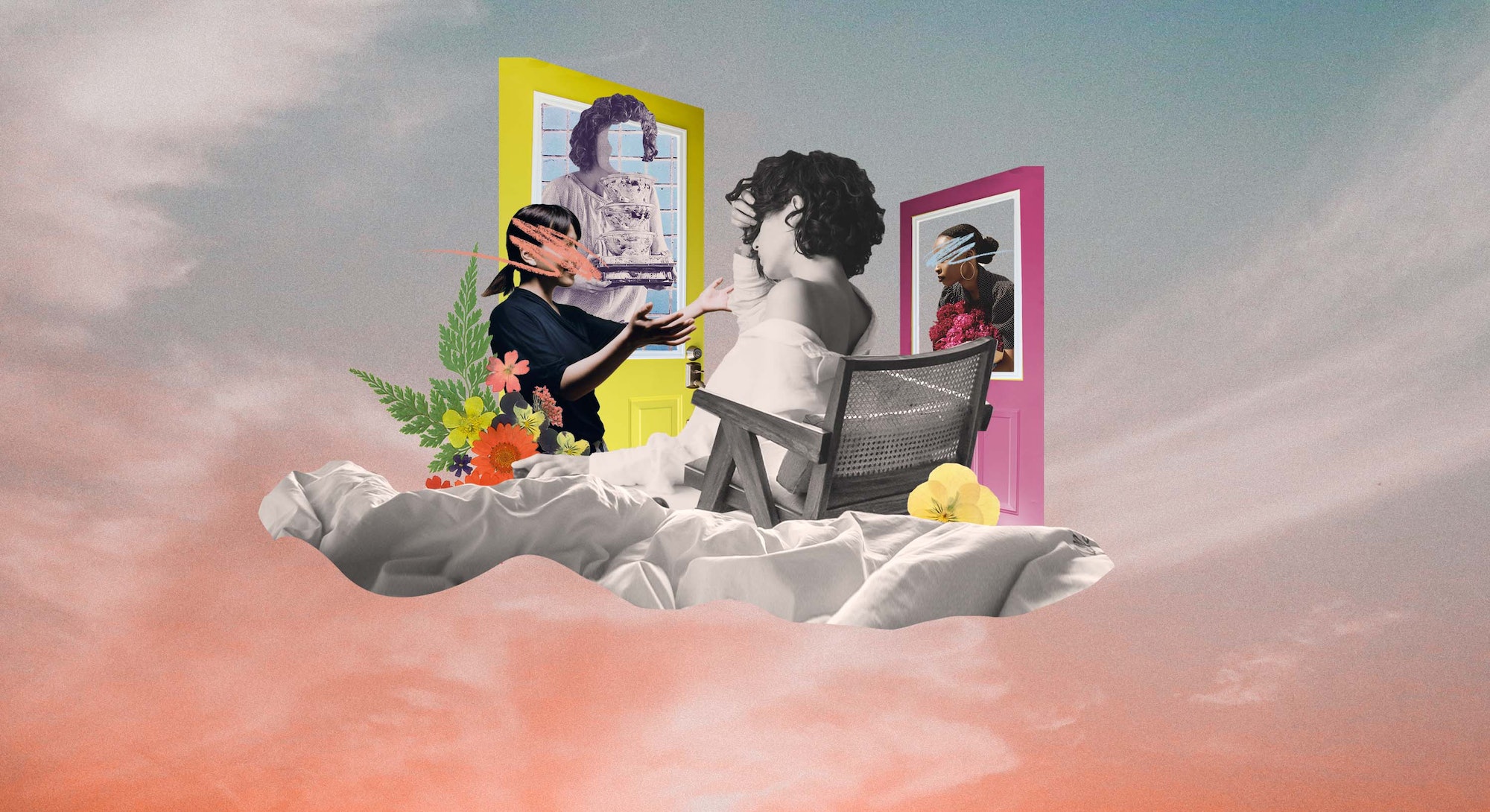 Abortion Takes A Village, Too

Communities shouldn't *have* to fill these gaps in care, but it's beautiful that we do.

The day after my abortion, I stepped into my winter boots and left my house to deliver a meal. A mother in my community had just given birth to a daughter, prematurely. The baby was in the NICU, growing stronger, while her parents took shifts, alternating between sleepless nights spent beside her hospital incubator and caring for her 3-year-old sibling at home. I was bringing them a feast of Iraqi takeout, from what they’d told me was their favorite local spot: spiced biryani, warm grape leaves stuffed with rice, juicy lamb kebabs and za’atar-dusted flatbreads and salty deep-fried falafel, and a rainbow of pickled vegetables, shining up from their brine-packed tub like so many pink and green and orange vinegared jewels. The act of bringing this dinner was at once special — infused with joy and warmth and comfort for an exhausted, overwhelmed family — but also entirely ordinary.

I was simply doing what so many friends and neighbors and co-workers had done for me the year before, when I’d given birth to my son and my fridge had filled immediately with unfamiliar Tupperware containers and casserole dishes and homemade postpartum tea blends and specially delivered cookies believed to promote lactation lined my kitchen counters. This must be the village, I’d said to my partner, weeping with gratitude and exhaustion and postpartum hormones, the village that it takes to raise a child.

Now, as I loaded the warm and fragrant takeout bags into my car, heading off to play my own small and unremarkable role as a villager in someone else’s life, I barely noticed the pickup truck approaching until it was rolling to a stop in front of my house. A woman I’d never seen before, wearing a colorful wool beanie and a brilliant smile, hopped down from the driver’s seat and walked up the driveway in my direction, waving. I saw that she was holding a huge glass mason jar of swirling amber liquid — broth and vegetables — and that a box of dried pasta was tucked under her arm. Chicken noodle soup. She greeted me, warmly and by name, as she met me by the car and held out the meal. A gift, for me. An offering.

This must be the village, I’d said to my partner, weeping with gratitude and exhaustion and postpartum hormones, the village that it takes to raise a child.

This friendly, soup-bearing stranger was, I now realized, a work colleague of my partner’s. Though we’d never met before, she knew the pain that bloomed in my lower abdomen, the very specific hairline fracture in my heart, the process unfolding inside my body and mind. She’d been speaking with him about the leave he was taking from work in order to care for me through my abortion, and he’d explained to her in candid terms why he needed the time off — that I’d had a medication abortion, which had been painful and also unsuccessful, and there was pregnancy tissue still clinging to the walls of my uterus. That I needed to undergo an in-clinic aspiration to finish emptying my womb. My partner would stay with me through the procedure and then help me recover by watching our 1-year-old, making comforting meals, bringing me pain medication and heating pads and the postpartum underwear I’d hoped to never see again. When this woman had heard about the physical and emotional pain I was in, she decided to treat me as she would someone who is postpartum — because she recognized that that’s exactly what I was. She — with an exhausting full-time job and a pregnant sister and a heavy responsibility load of her own — decided to bring me some dinner, just as I was doing for that new mother and her family.

“We think of all of these experiences — birth and abortion and miscarriage and everything — as these very separate experiences,” says Gabriella, a midwife who provides abortion care at a clinic in New England. “But really, in so many ways, they’re all on the same spectrum, the same wheel.” When Gabriella was undergoing the fertility treatments that would ultimately lead to the birth of her (now-4-year-old) child, she was called upon to accompany and support a close friend. “(She) found out, when she was 34 weeks pregnant with twins, that one of them had a completely devastating neurological condition. And nobody had spoken with her about selective termination; nobody had talked with her about it at all.”

“She was like, we can’t do this. This kid is going to have 30 seizures a day, and will suffer horribly for his entire life.” So, Gabriella dropped everything. She helped her friend figure out her options, and process all the emotions that attend the termination of a deeply wanted pregnancy. She flew across the country with her friend to a state where her third-trimester abortion was legal, supported her through the procedure, and accompanied her home.

“Having a baby is so ordinary and so extraordinary at the same time, and abortion is so much the same way.”

“On the shame tip … she felt horrible. She felt terribly guilty, and really traumatized. And I think one of the things that I was able to remind her of is: ‘If you had a friend who was going through this, would you find her horrible?’ And she was like ‘No, of course not.’ And I said, ‘Not only would you NOT find her horrible, but wouldn’t you actually find her even more deserving of your love? Would you not just want to wrap her up and tell her how good and brave she is?’

Implicit in the act of supporting someone’s abortion is affirming for them their inherent worth, goodness, and right to make that choice. "I think our culture has so much garbage that attends abortion, obviously,” Gabriella told me, “that in addition to that logistical piece — being able to fly back to her city with her, and tuck her into bed, before I got on a plane back to my city — was that I need to be able to reflect back to someone who they are.”

I know that the flowers delivered to me, the phone calls and texts and cards of support, the rainbow friendship bracelets beaded with care for me and my son, all did much to help drown out the voices of shame and stigma.

Camila Ochoa Mendoza, creator of the Abortion, With Love podcast, remembers with gratitude and tenderness the friend who — “a true Virgo,” she laughs — wrote out a schedule for her to follow as she had her medication abortion at home. And I was inspired to do the same for a friend of mine, whom I’d met through a local mother’s group while pregnant with our children, as we prepared for her self-managed abortion using pills obtained online. Many folks are able to be prescribed and shipped the medications when they’re not even pregnant, through a process called “Advance Provision,” to keep on hand just in case.

Stretching across the country and reaching into every state are vast networks of practical, financial, emotional, and sometimes medical support organizations and collectives. Indigenous people, Black people, and queer and trans people of color — folks used to loving and protecting one another from the systemic violence of the state, used to imagining and building structures of their own — have always recognized the need for interdependence and community in any and all pregnancy outcomes.

“It can be this calm, loving, supported situation. And that’s how we can take care of each other: by treating it like it is, as just a fact of life.”

Reproductive justice, as defined by SisterSong, the collective of Black women who formalized the term, is the human right to maintain personal bodily autonomy, have children, not have children, and parent the children we have in safe and sustainable communities. And living in service of that idea can take many forms, as abortion access increasingly becomes the province of our friend groups and social networks: being a sustaining donor to your local abortion fund, becoming a doula or talkline counselor, signing up to volunteer as a clinic escort to protect people accessing health care from the harassment and violence of anti-abortion protestors. Or simply showing up for individual people, in whatever ways you can, and helping to meet their needs as they navigate their abortions.

We shouldn’t have to show up in these ways for our community members when they have their abortions, considering how safe and straightforward — and how common — abortion is. But just as postpartum support has largely fallen to us to provide one another, so has abortion support. “Basically, in the same way that we are there for our friends who are postpartum,” says Gabriella, “and it is both this extraordinary thing and totally routine. Having a baby is so ordinary and so extraordinary at the same time, and abortion is so much the same way. It can be this calm, loving, supported situation. And that’s how we can take care of each other: by treating it like it is, as just a fact of life."

Despite our modern American culture’s tendency toward isolation, our communities are made up of many more people than just our family or friends. My next-door neighbors left a plate of home-baked brownies, a pint of vanilla ice cream, and a beautiful card on my doorstep. Co-workers shifted schedules around, taking on extra work to support me and cover for my absence. Strangers funded my abortion care through the Laura Fund ($555 in total, as I was denied even partial coverage by my health insurance company and — ironically — it was unaffordable on my health care worker’s salary at the clinic where I received it), and most abortion doulas work to support people they’ve never met before and may never see again.

We shouldn’t have to pour our own limited resources — our time, money, hearts, and health — so fully into building a scaffolding of funds and practical support organizations and advocacy groups, considering that abortion is safer than a root canal, and that taking Mifepristone and Misoprostol is safer than taking Tylenol, penicillin, or Viagra. We shouldn’t have to put our own bodies on the line to fill these gaps in care, to shield our community members and their families from the misogyny, transphobia, and medical racism found in both anti-abortion and “pro-choice” spaces. But it’s beautiful that we do. And we will keep showing up for one another, no matter what, to cook dinner, to babysit your kids, to drive you to the clinic. To braid your hair and hand you the heating pad. To be your village, whether you’re raising a child or not.