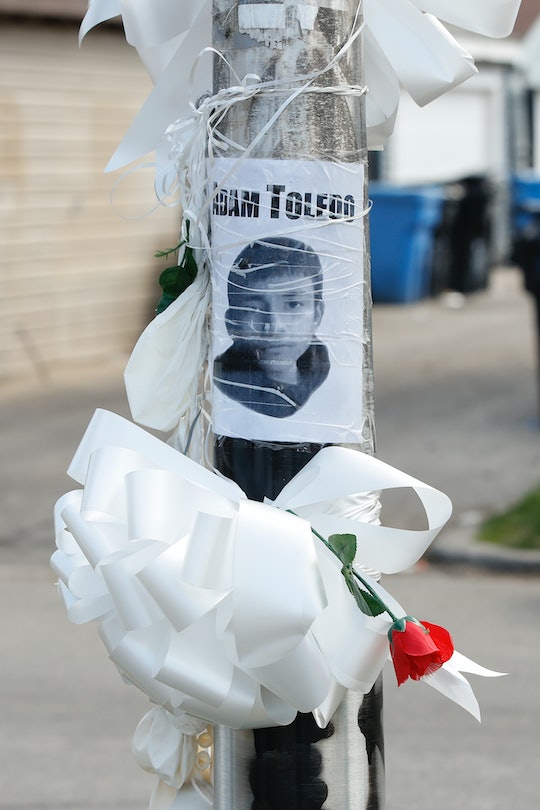 “Ironically one of his dreams was to become a police officer.”

After her 13-year-old son was shot and killed by a Chicago police officer, Adam Toledo’s mother wanted video footage of the incident to be released to the public. The young boy was shot in the chest by an officer in the early hours of March 29 in the Little Village community of Chicago, which the police alleged happened after an “armed confrontation.” Shortly after, Elizabeth Toledo called for the release of video footage so she could “know what really happened” to her son.

"I just want to know what really happened to my baby," Toledo said earlier this month, according to NBC Chicago. "They had a lot of options, but not kill him. They could have shot him in his legs, his arms, up in the air, I don't know but not kill my baby."

On April 15, the Civilian Office of Police Accountability released the footage along with the CCTV video of the altercation. Chicago Mayor Lori Lightfoot said in a press conference before the video was released that it was “excruciating” to watch. In the footage, the 13-year-old boy is seen standing with his hands in the air and did not appear to have a gun at the moment he was shot. "At the time Adam was shot, he did not have a gun, OK?" the Toledo’s family lawyer Adeena Weis-Ortiz said in a press conference, according to ABC Chicago.

The Chicago Police Department asserted in the aftermath of the release of the footage that Adam was shot after what they described as an “armed confrontation,” which also included 21-year-old Ruben Roman, who was allegedly with Adam at the time and has since been charged with aggravated unlawful use of a weapon, reckless discharge of a firearm, and child endangerment, according to NBC Chicago. The officer who shot Adam was identified as Adam Stillman, whose body cam footage showed him chasing the 13-year-old down an alley and shooting him approximately one second after he turns with his hands in the air, as USA Today reported. While it appears the 13-year-old threw something behind a fence that police later confirmed was a handgun, it appears that he was unarmed at the time of the shooting.

Before the footage was released, Adam’s mother remembered her son as a boy who “had many dreams that he will never get to live out” in a GoFundMe page, which was started to help with the cost of his funeral and is no longer accepting donations. “Ironically one of his dreams was to become a police officer,” she wrote. “Adam loved to play with [LEGOs], saying funny jokes to make others laugh, he was a child that brightened up the room when he would walk in.” Adam had four siblings and shared a room with his younger brother.

Adam Toledo’s mom remembers him as a boy who wanted to be a police officer.

The mother of five wanted the video of her son’s shooting to be made public simply because she wanted to know the truth. “It weighs heavy on our hearts to be planning our last goodbyes,” Toledo wrote on the GoFundMe. “Instead of watching him grow up and live out those dreams.”

At a vigil held for her son on April 5, Toledo did not attend but instead shared a statement with The Chicago Sun-Times about Adam. “He had a big imagination and curiosity since he was a little baby. He was goofy and always cracking jokes, making everyone laugh,” she said. “He loved animals and riding his bike. Adam was really into zombies. And the zombie apocalypse. He even had this zombie apocalypse bag packed and ready to go. Some of his favorite movies and TV shows were Cloudy with a Chance of Meatballs, Ghostbusters, SpongeBob SquarePants, Toy Story, Cars, The Walking Dead. His palate favored Taco Bell, pizza, chicken wings, chips and candy. May he rest in peace.”