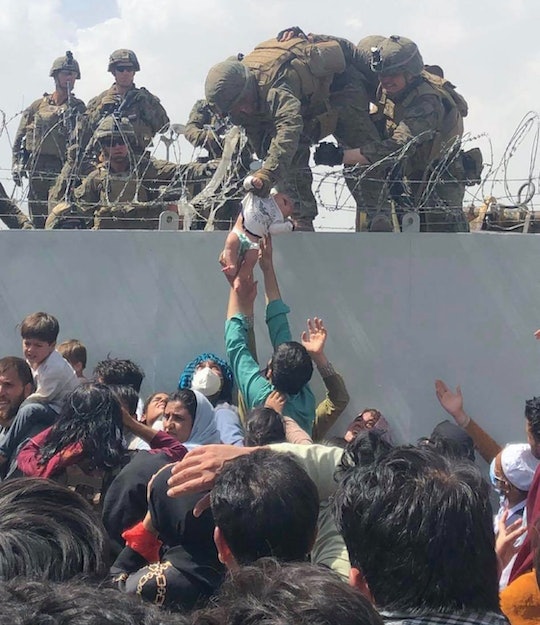 She was treated by doctors and is now with her mother.

As thousands of Afghans attempted to flee Kabul ahead of the Taliban takeover of the city, one father was clearly desperate to get his child to safety. So desperate that he handed his little one to U.S. soldiers over a razor sharp wire fence at Kabul's Hamid Karzai International Airport as the baby girl screamed. The video footage of the soldier gripping the baby by the arm to bring them to safety went viral as the world watched in horror, but this story at least has a somewhat happy ending as that baby has since been reunited with her parents.

Pentagon spokesperson John Kirby explained in a press briefing that the parents had handed the baby over to U.S. troops in an effort to receive medical attention and that the family has been reunited at a Norwegian hospital at the airport after the baby was treated. “Obviously, we have a responsibility to return a child to the child's parent,” Kirby said at the briefing. “I think this was a very humane act of compassion by the Marines.”

The video of the baby being handed over the fence was first shared last Thursday by human rights activist Omar Haidiri. British army surgeon Lt. Col. Benjamin Caeser told Sky News that he treated the baby girl. “As a recent father of a 14-month-old I have a little bit more experience dealing with small children,” he explained to the media outlet. “We took her for a walk around the hospital, managed to burp her a few times, she seemed to settle, she then sat with me.”

Kirby reported at a press briefing that the baby girl has since been reunited with her parents.

Video footage of a baby being handed over the fence to U.S. troops went viral.

The U.K. government has issued a warning to Afghan parents about passing their children over the barbed wire fence, with British Defense Secretary Ben Wallace explaining that the government “cannot just take a minor on their own,” as Sky News reported.

Still, parents are desperate to get their children to safety at any cost. A parachute regiment officer told The Sun, “The mothers were desperate, they were getting beaten by the Taliban. They shouted 'save my baby' and threw the babies at us, some of the babies fell on the barbed wire. It was awful what happened. By the end of the night there wasn't one man among us who was not crying.”

Caeser explained to Sky News that American, Norwegian, and British troops continue to care for the unattended minors as they work to reunite them with their families.