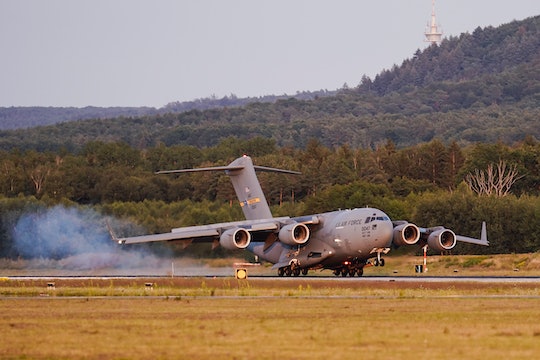 The baby girl was born in the plane’s cargo bay shortly after landing and her mother named her Reach.

An Afghan couple fleeing Taliban rule in Afghanistan touched down in their country of refuge with a new member over the weekend after the expectant mother went into labor while onboard a U.S. evacuation plane. According to U.S. Air Mobility Command, U.S. airmen and medical personnel reportedly helped deliver the baby in the plane’s cargo bay moments after it landed at Ramstein Air Base in Germany on Saturday. Both mother and child are said to be in good condition and the baby girl has reportedly been named after the aircraft she was born in.

“Medical support personnel from the 86th Medical Group help[ed] an Afghan mother and family off a U.S. Air Force C-17, call sign Reach 828, moments after she delivered a child aboard the aircraft upon landing at Ramstein Air Base,” a statement from Air Mobility Command said.

According to the military unit, the woman went into labor sometime after the evacuation flight had taken off from “an Intermediate Staging Base in the Middle East.” When the woman began experiencing complications as a result of low blood pressure, the aircraft commander opted to descend in altitude so as to increase air pressure in the aircraft. The move ultimately helped stabilize the mother, according to Air Mobility Command.

“Upon landing, airmen from the 86th MDG came aboard and delivered the child in the cargo bay of the aircraft,” a statement from the military unit read. “The baby girl and mother were transported to a nearby medical facility and are in good condition.”

Commander of U.S. European Command Gen. Tod D. Wolters later updated reporters that the child born on board the military transport aircraft had been named Reach, after the aircraft’s call sign of Reach 828. “They named the little girl Reach,” Wolters said in a video shared by NBC News. “As you can well imagine, being an airforce fighter pilot, it's my dream to watch that young child called Reach grow up and be a U.S. citizen and fly United States Air Force fighters in our Air Force."

Over the weekend, officials from the Department of Defense revealed approximately 22,000 people had been relocated since the end of July while roughly 17,000 had been evacuated from Afghanistan since the Taliban ramped up efforts to gain control of the country in mid-August. So for, more than 6,100 Afghan evacuees have been flown to Germany’s Ramstein Air Base since roughly mid-July as a part of the U.S. military’s Operation Allies Refuge, NBC News has reported.

President Joe Biden has assigned a deadline of Aug. 31 to all U.S. evacuation efforts but has signaled he may be willing to extend that deadline given how many Afghans are currently desperate to find a way out before the Taliban returns the country to the extreme form of sharia law it governed with in the mid to late ‘90s.

“Our hope is we will not have to extend [the deadline] but there are going to be discussions I suspect on how far along we are in the process,” Biden said Sunday. "Let me be clear, the evacuation of thousands from Kabul is going to be hard and painful no matter when it started and when we began... There is no way to evacuate this many people without pain and loss, of heartbreaking images you see on television. It’s just a fact. My heart aches for those people you see.”

"We have a long way to go and a lot could still go wrong," the president added.

Humanitarian organizations around the world are currently mobilizing to help Afghan women, children, and families secure evacuation and resettlement support.

This article was originally published on Aug. 23, 2021