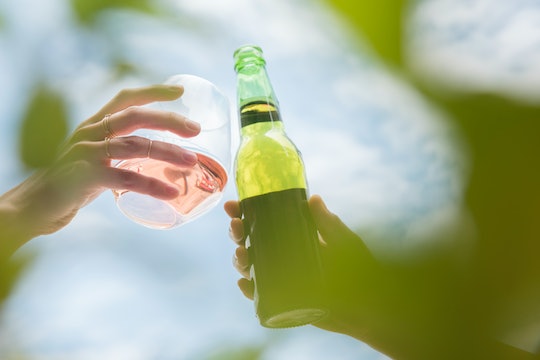 Having 6 Drinks A Week May Reduce Your Chances Of Getting Pregnant, New Study Says

Especially if you drink during the second half of your menstrual cycle.

If you’re considering trying to conceive any time soon, you might want to consider cutting back on your glass of wine after work. A new study published in the scientific journal European Society of Human Reproduction and Embryology found that drinking alcohol can reduce the chance of becoming pregnant. Particularly drinking during the second half of your menstrual cycle.

Dr. Kira Taylor, associate professor of epidemiology and population health at the University of Louisville School of Public Health and Information Sciences, and a team of researchers analyzed self-reported data of four years on the menstrual cycles of women between the age of 19 to 41. From 1990 to 1994, the 413 women in the small study kept daily diaries on how much alcohol they drank and what their drink of choice was. The study considered heavy drinking to be more than six drinks a week, moderate drinking was three to six times per week, while binge drinking was four drinks or more in one day.

“This is important because some women who are trying to conceive might believe it is 'safe' to drink during certain parts of the menstrual cycle,” Dr. Taylor said.

Researchers went on to note that drinking heavily during the second part of your menstrual cycle — also called the “luteal phase,” which begins after ovulation and usually lasts between 12 to 14 days — even moderate drinking hindered the possibility of pregnancy by around 44%.

This study supports previous research that has found alcohol to have an impact on fertility. A 2012 U.S. National Library of Medicine article notes that “alcohol has a detrimental effect on both male and female fertility.” According to Healthline, heavy drinking can affect a man’s fertility by altering sperm count, size, shape, and motility.

With that said, more research is needed on the subject. As Nature explains in a 2017 systematic review, various observational studies have “indicated there is no or even a positive association between moderate alcohol consumption and fertility in women and men.”

It is important to note that this recent study did not find alcohol caused a reduction in a woman’s chances of getting pregnant, rather alcohol was associated with reduced chances. “Our study only included a few hundred women,” Dr. Taylor explained. “And, while we believe the results strongly suggest that heavy and even moderate alcohol intake affects the ability to conceive, the exact percentages and numbers should be viewed as rough estimates.”

“The results in this study should not be construed to mean that drinking alcohol prevents pregnancy,” she added. “In other words, alcohol is not birth control. Even if a woman drinks alcohol heavily, if she has unprotected intercourse, she can become pregnant.”

Taylor, J. (2021) Drinking alcohol is linked to reduced chances of pregnancyStudy suggests women should avoid alcohol in second half of menstrual cycle, European Society of Human Reproduction and Embryology, https://www.eshre.eu/Press-Room/Press-releases-2021/alcohol_fertility