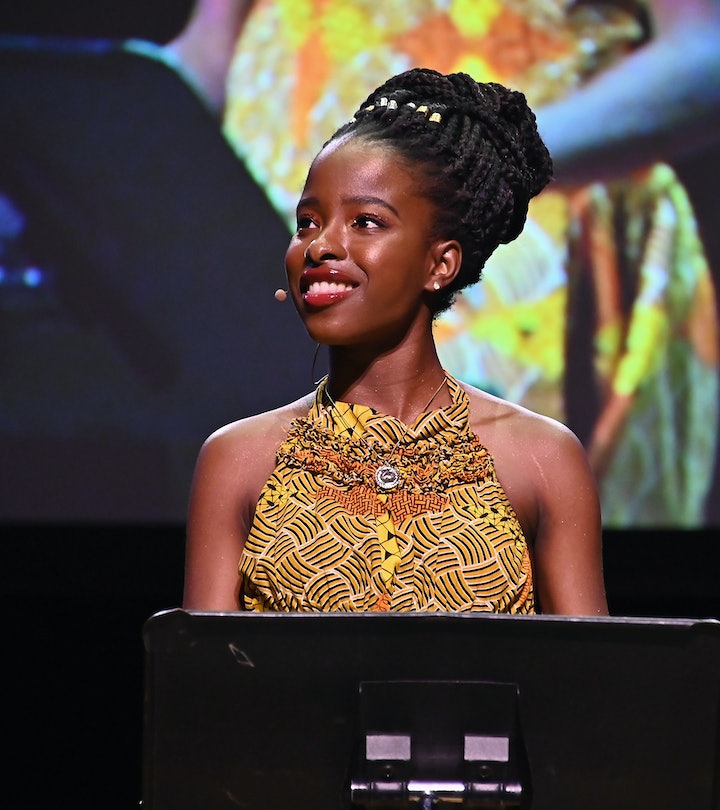 The 22-year-old poet was raised by a single mom.

Imagine being the mom of the youngest poet to ever perform at an inauguration in American history. How proud she must be. Youth Poet Laureate Amanda Gorman's mom Joan Wicks might not be in the headlines alongside her daughter since her performance, but she's been inspiring her along the way. Helping her get to a place where she can stand on a stage in front of the world and inspire the rest of us with her poetry.

The 22-year-old Harvard sociology student drew worldwide praise for the moving recitation of her poem "The Hill We Climb" at the Inauguration of President Joe Biden and Vice President Kamala Harris. It wasn't just the fact that she was the youngest poet ever to be invited to speak on Inauguration Day, it was the poem itself. Her words so inspiring President Barack Obama wrote in a tweet, "On a day for the history books, @AmandaGorman delivered a poem that more than met the moment. Young people like her are proof that 'there is always light, if only we're brave enough to see it; if only we're brave enough to be it.'"

Where did such a young woman find the confidence to be in her position? Well, having a mother who valued education didn't hurt matters.

Her Mom Is A Middle School Teacher

Gorman's mom Joan Wicks is a middle school teacher in the Los Angeles neighborhood of Watts, according to the Los Angeles Times. "Having a mom who is a teacher had a huge impact on me," Gorman told the newspaper of her mother's dedication to education.

She also told Study Breaks that her mother's job instilled in her the "life-or-death" importance of a good education. "Having a mother as a sixth-grade English teacher in an inner-city public school gave me an up-close and personal view of how literacy influences young students," Gorman told the outlet. "I realized that education can really be a life-or-death resource… School and college is a pathway to get off the streets, to break a cycle."

Amanda Gorman's mom worked her to raise her kids.

Wicks was a working mom as well, raising Gorman and her two siblings, including her twin sister Gabrielle, on her own, The Sun reported. According to Understood.org, the twins were born prematurely and Wicks was worried about their development, particularly a speech impediment on Amanda's part. But Wicks told the news outlet her daughter found a way, "Every child has a gift, it just has to be discovered. Where there’s a deficit, there’s a place where the child makes it up."

On Mother's Day in 2020, Gorman said on Instagram that her mother is the "best woman I know!" and called her "my light, my love, and bf."

Her Mom Made Sure She Knew Her Rights

Gorman told The Washington Post that one of her first political memories was when her mother read her Miranda Rights to her as a young girl. "When I was really young my mother would read me my Miranda Rights and make sure I knew them. My mom was not playing around," Gorman told the newspaper. "When you are a Black child growing up in America, our parents have to have what’s called ‘the talk’ with us." She went on to say, "My mom wanted to make sure I was prepared to grow up with Black skin in America, and that was my first awakening to the political climate I was stepping into."

Support & Inspiration Run In The Family

Gorman's mom isn't the only woman in the family to throw her support behind the young poet. Betha Gorman, Amanda's grandmother in Sacramento, told CBS News that she's proud of her granddaughter. "What I want is for her to be the best at whatever she chooses to do," she told the news outlet. "She is such a model for young Black women, young Black girls, and for girls – period."

As Amanda Gorman prepares to become the first poet to perform at the Super Bowl next Sunday, she has a strong mom on the sidelines supporting her. She's been lifted up, so she can lift others up as well.