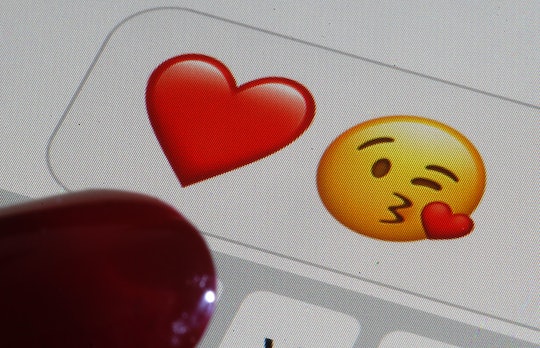 Apple’s new update also allows you to unlock your phone with your mask on.

There are some exciting new emojis rolling out as part of Apple’s new iOS 14.5 update that feel just about as 2021 as you can possibly get. For one thing, there are more smiley face emojis that actually represent the full range of complicated emotions we are all feeling right now after a year of face masks, social distancing, and homeschooling.

Apple’s new 14.5 update is rolling out on Friday, April 30, the company revealed in a press release, and will include more than 200 new emojis. Things like a vaccine-friendly update to the syringe emoji, now without blood, which people can perhaps use as a friendly reminder to their loved ones to go get their second dose of the COVID-19 vaccine instead of skipping it. There are also new burning heart emojis, a face in the clouds, and a person with a beard, with both long hair and short hair and several skin tones, rather than just a man with a beard to be more gender-inclusive. There are also many more versions of couples with different skin tones and genders represented, with 200 of the new 217 emojis focused specifically on skin tones and couple pairings.

Parents might especially appreciate the smiley face emitting a puff of smoke, which could be interpreted as someone heaving a sigh of frustration. Not an angry face or a smiley face, just a sigh of frustration. Or an exhausted exhale, take your pick. Then there is the swirly eye/grimace emoji that will speak to parents who have been dealing with homeschooling on a meaningful level. And the face in the clouds emoji could represent several different emotions like brain fog, confusion, or maybe even a sense of blissful calm.

Beyond the new emojis, another element of the new update is security. Facial recognition to unlock your phone has been enhanced so that you will be able to do this even while wearing a mask, as CNN reported. Additionally, Apple’s new gadget, AirTag, can be used on the “Find My” app to help retrieve your most important missing items, which will be so helpful to parents of kids who constantly lose things.

Apple’s new iOS 14.5 update will be ready to roll out on Friday. Insert appropriate emoji here.