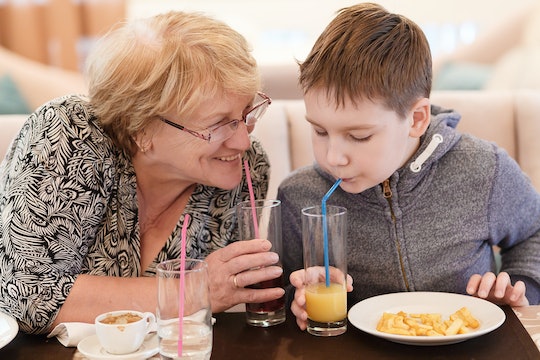 Your kid will never see these pranks coming.

Fact: Grandparents have all the fun. While moms and dads have to deal with all the stressful stuff like pediatrician appointments, report cards, and getting everybody out the door on time in the morning, grandparents get to focus on frivolity (mostly by letting your kids do stuff you don't and buying them things you won't). Take April Fools' Day, for example: While you're too busy and tired to think up any tricks, grandmas and grandpas live for this stuff. So what are some April Fools’ Day pranks for grandparents to play on grandkids this year?

Assuming your little one's grandparents are fans of gag humor and general tomfoolery, there are plenty of ways for them to take advantage of this annual opportunity that don't require a ton of effort or planning. Plus, since grandparents are stereotypically more likely to spoil a kid than try to be sneaky, it's safe to say your kid probably won't see these pranks from their grandparents coming.

And here's a way that parents can get their sneak on as part of this whole tradition: Why not convince your parents (or in-laws) that the easiest way to play their jokes would be by taking the kids for the day (or evening)? That way, you get a little time to yourself out of the deal. April Fools!

Kids will love seeing this playful side of their grandparents, but beware... they’ll probably get pretty pranky in return.