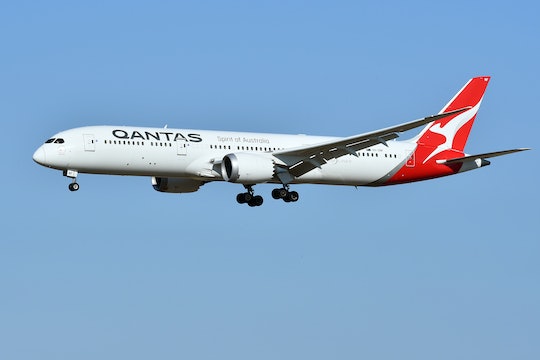 13-Month-Old Got Booked On Separate International Flight From Parents

After Qantas rebooked this Australian couple’s toddler on a different flight from Rome to Amsterdam to Bangkok, the family was stranded for 12 days.

Traveling with a toddler, especially abroad, is always a challenge. Between jet-lag, picky eating, little legs, and nap time, enjoying a vacation can be a stressful even under the best of circumstances. But if “worst possible travel scenarios for parents” was a contest, Stephanie and Andrew Braham are certainly in the running with their latest (still technically unresolved) kerfuffle. After the Australian couple’s 13-month-old was booked on a separate flight from Amsterdam to Bangkok, they were stranded in Rome for nearly two weeks.

The family’s nightmare, which was first reported by Insider, started off as a dream come true. The three spent more than three weeks traveling through Europe, which Stephanie told the outlet was “amazing”... until they reached their final destination: the Rome-Fiumicino International Airport. Upon arrival, the Brahams had no reason to believe that anything was amiss with their travel plan. From Rome they’d fly to Amsterdam, then Amsterdam to Bangkok before heading to Australia. Stephanie had initially booked a flight with Qantas via British Airways months ago, but said things got changed a couple months later to flights on KLM Royal Dutch Airlines due to a connection issue. And yet it would seem a connection issue remained...

When the family got to check-in, according to Insider, KLM informed the couple their baby was booked on another flight from Amsterdam to Bangkok — one that would head out 40 minutes after theirs. Obviously, this was not an option. But in arguing with the airline for about 90 minutes in Rome (including saying the baby could simply sit on their lap, which is generally a viable option for children under 2 years old), the flight to Amsterdam left without them.

The Brahams then turned to Qantas to try to sort out the matter to no avail before finally heading to a nearby hotel six hours later... where the nightmare continued.

“We spent 20 hours 47 minutes and 13 seconds on the phone to Qantas over a 24-hour period, and over 55 separate phone calls, before they finally agreed to book us on new flights home,” Stephanie told Chanel 9’s Today Show in Australia.

Even then, the family didn’t seem to be any closer to resolution until the following morning when, according to Insider, a representative from Qantas let them know — hooray! — there was a flight for them the following afternoon.

Can you guess what happened next? You probably have a good idea at this point...

Upon arriving at the airport, the family discovered that Qantas, according to Stephanie, hadn’t properly reissued their tickets. No other airline had anything available, either. “It was so stressful because we didn't know if we were ever going to get home,” she told Insider.

The family currently has a flight booked for July 26 – 12 days after they were supposed to be on their way. Neither Qantas nor KLM has responded to Romper’s request for comment, but in a statement to The Daily Mail, Qantas “sincerely apologises” for what they referred to as “a backend administrative error.” They also said they would reimburse the family for their accommodations. However, Stephanie told Insider that the $200 doesn’t come close to covering the lodgings, food, and lost wages that have resulted from the issue, which she puts at approximately $15,000

Of course the question on everyone’s mind: will this current resolution, in fact, prove to be an actual resolution? “We’re seething,” Andrew told Today. “I’m meant to be home. I don’t think we will really feel assured until we get on that plane and the plane is in the air at this stage.”

It’s a fair caveat. But at least the Brahams can take cold comfort in the fact it’s not personal: within the same week they were in the midst of their own derailed travel plans, fellow Aussie parent Katherine McDonald recently discovered her 3-year-old was put on a different connecting flight from the rest of the family after the initial Brisbane to Dubai leg of the trip. “It's a child’s ticket, it says his name and then 'child', so they should have been aware,” she told Yahoo! News Australia. In a statement to Yahoo!, a spokesperson for the airline “sincerely apologised”.