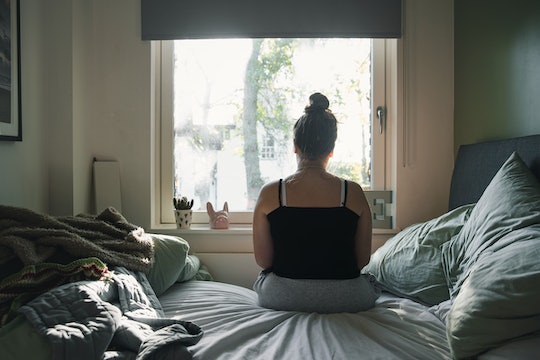 While I do not necessarily regret my surgery, I regret every single negative comment and shaming stereotype that led up to it.

This month, the American Academy of Pediatrics — an organization I have long trusted as both a parent and a journalist — released a new set of guidelines for the treatment of adolescent obesity. While the document does acknowledge the many factors such as genetics that contribute to body size, there is also a recommendation of bariatric surgery for some adolescents as young as 13. When I read those words, my heart stopped.

Content Warning: This article contains discussion of the author's experience with disordered eating, weight-loss surgery, and diet culture, which may be triggering for some readers.

I have spent most of my life chasing a beauty standard that wasn’t ever designed for a body like mine, culminating in gastric bypass surgery and a more than 200-pound weight loss in 2017. While I do not necessarily regret my surgery, I regret every single negative comment and shaming stereotype that led up to it. The diet culture that permeated every facet of my childhood led me to that point — and to a life of disordered eating that broke my ability to have any healthy relationship with food.

These days, ballads slamming diet culture like JAX’s “Victoria’s Secret” are popular and celebrities like Lizzo now grace the cover of the same glossy magazines that used to torment me as a kid. I’d begun to nurture a sliver of hope that my kids were growing up in a different world and wouldn’t develop the same body issues that I did.

The painful surgery that I chose to undergo as a 34-year-old woman is something I cannot ever imagine a child navigating.

Instead, the top docs in the nation are lowering the age at which patients can have most of their stomach removed and their intestines rerouted to induce drastic weight loss. The painful surgery that I chose to undergo as a 34-year-old woman is something I cannot ever imagine a child navigating. I couldn’t finish a cheese stick in one sitting for nearly a year. Sometimes, five years later, I still vomit from a bite of food that gets “stuck” in the small opening my surgeon created.

There are some positive things that came out of the surgery for me. I had few complications. The herniated discs that prevented me from lifting my children healed with less stress on them. And yes, I lost over 200 pounds in less than a year. I am a success story, according to my doctor. It was still a brutal process.

The new AAP announcement has caused me to think critically about my body’s journey. And one thing I know for certain: Losing weight doesn’t undo the trauma of diet culture. It doesn’t for adults, and it certainly won’t for kids.

In 5th grade, my mom took me to Weight Watchers where I learned to count food points with other middle schoolers. I restricted eating — sometimes going 15 hours or more before binging in secret until I felt sick. I tried to make myself puke, but wasn’t good at it. Later, in high school, my best friend and I wrestled, together, through a variety of unhealthy coping mechanisms. Fueled by our mutual desire to look more like the models on the cover of Seventeen than any actual woman in our lives, it was pretty easy to develop broken eating habits and an unhealthy, tortured self-image.

I don’t blame our mothers, because they grew up in the same broken system they raised us in. None of us was ever made to feel our own bodies were just fine — perfect, even. My mom is one of the most beautiful women I’ve ever seen but I’ve watched her lament her weight my entire life. (We are Italian women with asses that won’t quit, Mom. It’s okay.)

When I became a mom myself I worried constantly about my kids’ body image. Blogs outlined the best way to introduce baby foods so that our kids wouldn’t grow up to crave sugar — and shamed parents of picky eaters. Every time I took my kids to the pediatrician, my anxiety rose the second they called our name. That scale, in the tiny vitals room, triggered a trauma response from my own childhood. Years of being spoken about as if I wasn’t present while the adults in my life discussed my weight and body size left a significant scar on my psyche.

I realized early in my children’s lives that I could not perpetuate the cycle that harmed me, my mother, and my grandmother before her. While I wasn’t yet ready to deal with my own food and body issues, I actively strove to raise my kids in a more body-positive home.

Our doctor doesn’t impart that trauma on my kids. Even while still battling my own demons, I sought out a practitioner who talked about food in a way I had never heard before. She doesn’t discuss scale numbers out loud. There are no bad foods, she explains to my children. There are “sometimes foods.” There are “everyday foods.” There are foods that fuel the activities we want to do, and foods that might make us feel more sluggish or make our bellies hurt. Food can be a celebration and comfort. That’s not actually a bad thing.

While she talks to my young children, I absorb every word she says. I pray they are absorbing these truths even while I still find them hard to believe about myself.

When I elected to undergo surgery five years ago, my three oldest kids were not even in elementary school. As mothers, we often make better choices for our kids than we do for ourselves. I was working so hard to instill healthy ideas about food and weight in my kids while still stuck in my own disordered ways. Even the process of preparing for gastric bypass itself further fueled my disordered eating. The “food funeral” I had before my procedure to say goodbye to my favorite meals was just a perpetuation of the same trauma I endured my entire life. I was broken because I couldn’t control what I ate, so they needed to cut me up and fix me.

The issue was never really my weight. The issue was all of the mixed messages swirling around me my entire life, confusing me about what my body needed to feel good.

The real kicker is that while bariatric surgery solved my obesity issue, it, of course, never fixed my body image issues. At 5’10”, my weight plummeted over 200 pounds. The size 4 that I had dreamed of my whole life actually looked terrible on me. I couldn’t get comfortable at night when my hip bones jabbed with every toss and turn. My hair fell out. Neighbors asked gently how chemo was going. My babies lost their comfort spot on my chest when my DD breasts shrunk to what we jokingly called “B-cup extra longs.” I remember clunking my newborn’s head off my now-sharp collarbone. She cried, a lot. My body deflated, but my issues ballooned as large as ever.

I’ve now realized that is because the issue was never really the weight. The issue was all of the mixed messages swirling around me my entire life, confusing me about what my body needed to feel good — and what I needed to feel good about my body. But as I repeatedly told my kids that there were no bad foods, as I told them soft tummies were beautiful, as I filled our home with images that reflect the reality of bodies, I finally began to absorb my own words. When I talk about my surgery with them, I describe it as a result of not learning to have a healthy relationship with food. I teach them that I don’t want the same for them. “When we know better, we do better,” is a common mantra in our family.

Like most folks after gastric bypass, my weight has fluctuated.

At a recent neighborhood Halloween party, I donned my 2009 wedding dress for an easy costume — topping it off with my preschooler’s Cinderella tiara. I remembered feeling devastated that the seamstress had “only” been able to cut my dress down to a size 12/14 before our wedding day. The saleswoman had told me that even though I was purchasing a size 16 dress, they could cut it all the way down to a 10 if I worked hard. Every bridal magazine was packed with diet tips that, once again, didn’t work for me. I didn’t feel beautiful on my wedding day. I felt like a failure.

After that day, I gained another 150 pounds through more disordered eating and unchecked polycystic ovarian syndrome. For years, I couldn’t even glance at the dress stuffed in our third-floor closet. It was another painful memory of failure.

Once I realized how closely my kids are listening to what I say about my body, I knew I could never teach them to feel good about theirs while hating mine. I bombard myself with women who speak truth about bodies like Kellie Brown, Roxane Gay, and Virginia Sole-Smith, in an effort to drown out the internal voice that tells me I don’t measure up. Five years post-surgery, I’ve finally come to terms with my body. I accept that it is not — and never has been — the enemy. I even love it now. It wasn’t an easy journey to feel content in my own skin. It’s a lifelong process to reframe how I think about food, health, and body size. I have to intentionally choose to drown out the broader cultural negativity — every day.

That same dress fits me perfectly once again. Now, though, I know I look amazing in it. I just wish it did not take me nearly 40 years to realize that my body has always been acceptable, in all of its versions. We need to be teaching that to our kids — not prepping them for surgery.

Recently, I drove my 9-year-old daughter and her friends to the mall. When “Victoria’s Secret” came on the radio, they shrieked with excitement. As this gaggle of young girls shouted the lyrics that embrace bodies of all shapes and sizes, unchecked tears streamed down my face. “I wish somebody would have told me that ‘thighs of thunder’ meant normal human thighs…” the TikTok sensation sang, and all I could think about was how differently my own childhood would have gone if someone had just told me that, too.

If you or someone you know has an eating disorder and needs help, call the National Eating Disorders Association helpline at 1-800-931-2237, text 741741, or chat online with a helpline volunteer here.